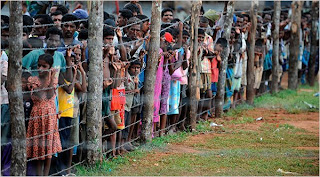 The photo above published in today's NYT is telling. It is very reminiscent of Auschwitz and Dachau. If one looks closely one can see that it is mostly children standing there. They will carry their scars for decades if at all they can return to any normalcy.

The tragedy of Lankan Tamils is getting worse by the day between two supposed liberators. Both the Lankan Government and LTTE are claiming to prolong this tragedy in the name of the people. Rajapakse claims he is liberating "hostages" , LTTE claims they are fighting for a homeland and that the people are staying back of their own free will.

What struck me as curious about the humanitarian mission by, David Miliband, Britain’s foreign secretary and Bernard Kouchner, Foreign minister of France is that they visited the refugee camps. Pranab Mukherjee on the other hand visited only Rajapaksa, shook his hands, shared a smile in front of flashing bulbs and returned home empty handed. The European ministers on the other hand were extremely critical of Rajapakse, yes they could not achieve more but at least they did not just pose for photographs and were moer explicitly vocal in their criticisms.

The gesture of visiting refugee camp is significant. If Pranab, accompanied by a Tamil Nadu minister, did the same it would have meant something for the poor souls seeing their brethren visit them. But alas what Pranab did was more due to compulsion of electoral politics than out of genuine concern.

"Mr. Kouchner, who has spent four decades in conflict zones and is a co-founder of Doctors Without Borders, said in an interview before his departure that he did not entirely trust the Sri Lankan government’s assurances.“Do I believe them? No, not completely,” he said. But he said he discounted claims by the rebels even more."

India and the International community are yet to prick the soft underbelly of Sri Lanka's economy. I do not understand why the EU could not impose an embargo on exports from Sri Lanka. Sri Lanka is heavily dependent on garment exports and is very vulnerable if that spigot is turned off. Here is an idea for MNC's, why not picket department stores that stock clothing from Sri Lanka.

Another painful truth is there exists no legitimate avenue to channelise financial aid. Any donor is immediately worried about money being funneled to LTTE, a proscribed organization in USA and would constitute a crime unless it was proven that the donor did not know that the recipient was a front for LTTE. There are no NGO's operating in Lanka who can tap into global diaspora. In the absence of those what the diaspora does is just marching up and down avenues in front of consulates. There is almost total absence of concrete efforts to help the refugees.

The onus to stop the war is on Mr Prabakaran as he is the only pretext for the war. If he had any love for his people he should abdicate without delay. Without him on the scene the international community will bear down on Rajapakse unequivocally unlike today when they still have to excuse the war and voice concern about civilians in a restrained manner.
Posted by Athenaeum at 12:41 PM