An Evening With Quantum Physics At NYC.

Nearly a month before FeTNA I visited the 'World Science Festival' held in NYC. It was the most pleasant weekend I had in a long time. The festival underscored what I would call as the essence of America, America's intrinsic strength. Imagine an auditorium with 800 people listening to a lecture on quantum physics for 90 minutes in total silence, followed by a Q&A, followed by a demonstration of quantum levitation.

The festival is the brain child of celebrated bestselling author, physicist and teacher at Columbia University,NYC Brian Greene. Greene, wikipedia says, got the idea from a festival he saw in Genoa. In an interview with 'Scientific American', another great American institution, Greene spoke about his motivation for such a festival citing an op-ed by NYT columnist Nicholas Kristof, "The hubris of the humanities", "in educated circles if you say, "I've never heard of that guy Shakespeare" or "Beethoven who?" people would be, like, that's odd. But in those very same circles, if you say, "What's a quark?" and "Quasars, what are those?" and "Square root, what's that about?"—in those circles, that's okay. In fact, for some people, that's a badge to be proud of, that you stayed away from the science. I think if you have a celebratory environment around science—one that gains a critical mass of great scientists, the general public, and media attention—you can begin to influence that cultural perspective".


I came to know of this festival pretty late so I could not go to many lectures I'd have loved to. Biologist E.O.Wilson's lecture was sold out as was Brian Greene's lecture on quantum physics. I went to a couple of book talks and signing.


Investigative journalist Peter Pringle presented his book "Experiment Eleven: Dark secrets behind the discovery of a wonder drug". Streptomycin was the miracle antibiotic that cured tuberculosis and its 'supposed' discoverer Selman Waksman, Rutgers University, NJ, won the Nobel for that. Tuberculosis is a scourge that had killed millions and was considered a fatal disease, notable victims include Kamala Nehru. Pringle's book is about how Waksman was not the actual discoverer but it was Waksman's student Albert Schatz who discovered the drug. It is now legally recognized that Schatz was the discoverer. Pringle took us through an entertaining tale of deceit and hubris. A PhD student in the audience lamented about how professors steal students' work. As a true American she has filed a law suit too!!!


The show stealer was Professor Lawrence Krauss who talked about his latest book "A universe from nothing: Why there is something rather than nothing". Krauss gave an entertaining lecture complete with self deprecatory humor, a risqué joke, a poke at republicans and Fox TV etc. During Q&A a student asked Krauss why he refuses to recognize the much discussed 'string theory'. Krauss is also the author of 'Quantum Man' a biography of Nobel laureate and bestselling author Richard Feynman. The festival organizers had organized book stalls selling the relevant books. Krauss had a signing session. I had bought both of his books. I am a big fan of Feynman. When my turn for signing came up I asked Krauss how does his biography compare with James Gleick's bestseller biography 'Genius:The life and science of Richard Feynman'. I had read Gleick's book in 90's. Krauss said "Gleick's book is a wonderful one but I've attempted a scientific biography hope you will find it likable". I gave him my driver's license so he could write my name properly. Krauss wrote "Aravindan, thanks for coming to hear me". 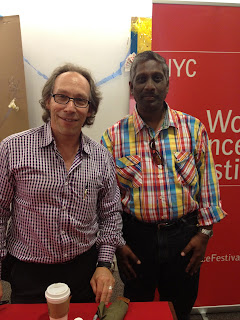 It is amazing to see these guys, so famous, come and go without any pomposity. Questioners ask them any question and do so on equal footing without elaborate meaningless prefaces likes "with all due respect" etc. There are no hangers on to these professors. They just stroll in and take the podium. A black car waits to take them back to hotel or to another venue. Nobody runs around carrying their bag and waiting on them like they are demigods. I've a reason to specify all this.


Brian Greene's lecture 'Spooky Action: The drama of quantum mechanics' was a tour-de-force. The hall was jam packed. If I had not read John Gribbin's 'Schrodinger's cat' I'd be lost in that lecture. Greene was entertaining, humorous and maintained a level for the lecture. A Princeton university professor came on stage to demonstrate quantum levitation. Usually I lament about my school teachers for their utter lack of knowledge and creativity, apparently the teachers in USA are only a little better according Krauss's book on Feynman. Greene, though, is loved by his students for his lectures.


The concluding day has a science fair. I took Rowena for that. What a fair it was. Rutgers University physics professor and his students demonstrated basic physics concepts including how a corpulent professor can lie on a bed of nails.


I cannot admire Greene enough for this but his interview in Scientific American highlights the greatest part of all this. Educating kids. Krauss sends a person like Leon Lederman, Nobel laureate, to schools where kids can 'interview' him. Krauss explains what a charm it is to have kids do an interview, "Kids don't necessarily move on if they don't get it. And since a lot of the audience may not be getting it, too, it's wonderful for the audience to see this happen, to make them recognize they're not the only ones. It is an opportunity for the scientist to try to describe things in five or six different ways".Many schools take part in the fair and we saw teams presenting robotics.


The whole event was taking place in the NYU (New York University) halls and neighboring Washington Square park in downtown NYC. Yet the number of Afro-Americans in the audiences was not significant. The audience was mostly Caucasian and Asian.


The event depends heavily on volunteers, many of whom worked under 100F heat in NYC. Yet the program was professionally managed, always on time etc. The budget is $5 million. Before anyone can say "oh well they got money" I'd like to add that the production costs are considerable for the science shows and when you invite people like Krauss, E.O.Wilson, Stephen Hawking, you have to spend a lot on their accommodation etc. When the screen parts and the show starts it does not matter if the show was run with volunteers what matters is if the presentation met a standard.


Money will not generate vision. The vision and intellectual integrity of the show depends on Brian Greene and others. It is that integrity which draws even a person like Hawking. Greene makes use of actor Alan Alda who is an avid science guy too. Visiting a show like this leaves one intellectually satisfied and you feel like at the end of 2 days you are a better human being than you were on Friday evening.

Email ThisBlogThis!Share to TwitterShare to FacebookShare to Pinterest
Labels: Science

The same reason I am quitting my studies in India and coming over there sir. No fawning.

About the post, I loved your easy references to Schrodinger's cat and Quantum levitation. The authoring was like a thread, Connecting different pieces.From Education scenario in US and India, Afro American concerns, personality observations and the effect of budgets in a successful science meet.

If I have to be a wowser, I will complain against the unavailability of links to the actual presentation. But yes, I can search it from the geo tags and the dates available. Thanks..