H is for Hawk:Falconry as Therapy for Grief

"We sat in chairs that Dad should be sitting in, drank from cups he had drunk from, and when I saw his careful handwriting on a note pinned by the back door it got too much". Having lost a much loved father Helen Macdonald learns that "Absences. Losses. Things that were there are no longer. And you realize, too, that you have to grow around and between gaps". Grow, she does, 'between the gaps' by turning to falconry.

Macdonald decides to raise a falcon and not just any falcon but a goshawk, a breed known for its ferocity and find meaning after the death of her father leaves a painful vacuum. Published to great acclaim 'H is for Hawk' is a lyrical tale told with beauty that braids falconry, grief and biography of falconer and author T.H. White.

When I read Paul Kalanithi's masterful "When breathe becomes air" all I could think of was my dad who passed away recently. As I wrote in my book review he would've enjoyed that book at many levels. A song, a book, a thought here, a beach there, a piece of music, a phrase all can conjure up memories of my dad. Even my politics is guided by the values we shared. MacDonald makes a profound observation when she states that the "archeology of grief is not ordered. It is more like earth under a spade, turning up things you had forgotten. Surprising things come to light: not simply memories, but states of mind, emotions, older ways of seeing the world".

Writing dismissively of how people often mistake a sparrowhawk for a goshawk MacDonald describes a goshawk, "In real life goshawks resemble sparrowhawks the way leopards resemble housecats. Bigger, yes. But bulkier, bloodier, deadlier, scarier and much, much harder to see. Birds of the deep woodlands, not gardens, they're the birdwatchers' dark grail". It is such a bird that MacDonald decides would be therapy to her grief stricken soul.

As an 8 year old Macdonald had read T.H. White's 'The goshawk' and felt "this was a book about falconry by a man who seemed to know nothing about it". A falconer's journal had summed  up the book as "The Goshawk will be a well-written catalogue of most things one should not do". Now, an adult falconer, MacDonald turns to White's book to re-read. The book then flits back and forth between Macdonald's domestication of the goshawk, White's compelling life history and falconry itself. Punctuating this layered storytelling are memories of Macdonald's father. The chapter titled "Holding Tight" narrates how making jesses, harnesses for the falcon, reminds the author of how she's holding tight to her father's memory. 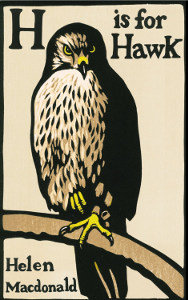 T.H. White, his biographer wrote, was a sado-masochist and Macdonald writes "White always took great pains to be gentle precisely because he wanted to be cruel". White, a homosexual, and author of books on the Arthur legend retreated from society to raise a goshawk. He penned a memoir that was discovered by chance and published in 1951.

Manning a goshawk was to White a "metaphysical battle" akin to tales like "Old man and the sea" and "Moby Dick". White's retreat to the countryside was motivated by another vital factor than just his conflict with human society. Being a gay man in then England was, as Alan Turing would learn, a death sentence. Macdonald trenchantly observes that "the countryside wasn't just something that was safe to love: it was love that was safe to write about". "Many classic books about animals", MacDonald realizes, "were by gay writers who wrote of their relationships with animals in lieu of human loves of which they could not speak".

In class obsessed England White realizes that improper usage of falconry vocabulary will make him an outcaste. Macdonald who reads the old classics of falconry realizes that unconsciously she was "soaking up the assumptions of an imperial elite".

Macdonald, alternates between seeing herself as the hawk and realizing that she and the hawk will never be the same. At one moment she feels "the hawk was everything I wanted to be: solitary, self possessed, free from grief, and numb to the hurts of life". But then she realizes that "the world she lives is not" hers because the "hawk can see colors" that she could not, "right into the ultraviolet spectrum".

Falcons have always suffused the imagery of war and Macdonald, in one chapter, weaves memories of her father growing up during the war, airmen who flew allied aircraft during the war amidst great danger and White's politics. "One in four did not complete their tour of duty", she wrote of the airmen, "The sky was not a place of safety, no matter how commanding their view. What happened to them was terrible. What they did was terrible beyond imagining. No war can ever be just air".

Birds have inspired both Keats and Shelley. Macdonald quotes Keats when she feels she has become one with the hawk:"you are exercising what the poet Keats called your chameleon like quality, the ability to tolerate a loss of self, and a loss of rationality by trusting the capacity to recreate oneself in another character or another environment". Now read Shelley's 'Ode to a skylark'. The lines will radiate and be transformative.

"Higher still and higher
From the earth thou springest,
Like a cloud of fire;
The blue deep thou wingest,
And singing still dost soar, and soaring ever singest."

Writing about animals gives scope for colorful vocabulary. People in groups are crowds, gatherings or mobs but for animals a group of lions is a herd, a group of hyenas is a pack, a group of pheasants is a city. Helen Macdonald, a lprofessor of history and philosophy, serves up iridescent passages where profound observations come clothed in fine prose and in places sparkling prose brings vividly to the reader's mind a picture.

Comparing the relative advantages of a hare, running on the ground, from its aerial predator, the goshawk, Macdonald writes "The hare has purchase: its claws and furry pads dig into leaves and mud, and it uses the ground to propel itself against. But the hawk moves in air alone. It is like watching one element against another. One world versus another, like a gannet diving into the sea for fish".

"Have you ever watched a deer walking out from cover? They step, stop, and stay, motionless, nose to the air, looking and smelling. A nervous twitch might run down their flanks. And then, reassured that all is safe, they ankle their way out of the brush to graze". Any sensitive reader can imagine vividly a deer that apprehensively steps out and "ankles out of a brush". Calling shreds of a chicken that the hawk eagerly tears and swallows Macdonald coins a fine phrase, "disarticulated pieces of chicken'.

The finest prose is when Macdonald describes how a male, called a tiercel, and female hawk flirtatiously fly.

"They were loving the space between each other, and carving it into all sorts of beautiful concentric chords and distances. A couple of flaps, and the male, the tiercel, would be above the female, and then he'd drift north of her, and then slip down, fast, like a knife cut, a smooth calligraphic scrawl underneath her, and she'd dip a wing, and they soar up again". Read Shelley again.

Describing a world spinning out of control W.B. Yeats wrote "the falcon does not listen to the falconer". Reading 'H is for Hawk' taught me why Yeats chose the falcon and falconry as symbols of a world order being disturbed. "Civilizations rise and fall but hawks stay the same".

"H is for Hawk" was awarded the Samuel Johnson prize and made it to the top 10 books to be read in New York Times's list of books in 2015 and one of the best books of the year by The Economist. All richly deserved accolades.

The book is a very rewarding read. That said, I felt the book could've benefited more with better articulation of why Macdonald feels so deeply attached to her father. The snatches of memory that she interweaves into the narration give glimpses into her father's nature but not too much about how her father affected her. Maybe the lightness of detail is intentional so the private remains sacred and private. The eponymously titled chapters frames each chapter into a readymade expectation for the reader thus robbing of subtleties and kind of provides the reader with an instant gratification when passages that reiterate the chapter title occurs and that detracts some artistic merit.
Posted by Athenaeum at 11:19 PM

Fantastic review! A passionate account of an intense book.