Is the Media Biased Against Trump? No. Not At All. Here's Why.

A recent Quinnipiac poll, Politico wrote, showed that "Fifty-five percent of likely voters surveyed said the media are biased against the Republican presidential nominee, while 42 percent said there is no media bias against the real estate mogul. Almost 9 of 10 Republicans say news organizations are biased against Trump". This is plain unadulterated nonsense and completely untrue. Those who live by the sword, it is said, die by the sword. It applies to those who live off the media too.

No candidate for American presidency for a major political party in recent memory has behaved as indecently and as cruelly as Donald J. Trump and no candidate ever has manipulated the media so smartly and hijacked a party so completely. Irrespective of what happens next week this election will spawn a mini-library of books that seek to probe and understand this grotesque spectacle that is within close reach the land's highest office.

Let us not forget that Trump started his candidacy by declaring an entire ethnic race as "rapists and murderers". Contrast that with the speech of Barack Obama, a speech that was a call for a different politics and hope, in Springfield Illinois when he announced his candidacy. That speech of Trump would've ended the dreams of many candidates within hours but his support skyrocketed. The Trump candidacy had just begun. A sickening spectacle of insults and invective driven candidacy would consume the nation for over a year.

Trump followed up that speech with an interview where he ridiculed an ex-war veteran, a POW and former GOP nominee John McCain as a coward for being captured in the first place. McCain refused an early release by his captors when they tried to barter him and instead he suffered years of torture that left him maimed for life. Ridiculing a war veteran, let alone one who was POW and that too a former nominee of his own party as 'coward', especially in the GOP, would end the candidacy of any other. Trump saw his support surge further.

By now CNN, Fox News and MSNBC started showing Trump's rallies live and for the entire duration. Note, during the same time Bernie Sanders, on the Democratic side, was equally attracting thousands to his rallies but was almost ignored. ABC CEO declared "Trump may not be good for America but he was good for ABC". TV ratings zoomed up and Trump was the meal ticket of the media.

Trump dominated Sunday and morning talk shows. Until the Trump came along TV anchors would refuse anyone phoning in for interviews. To be fair to Trump unlike other candidates he made himself readily available for interviews on almost daily basis but it was also possible because he was phoning it in.  A media analysis showed that Trump enjoyed 'earned media' worth $2 Billion. Yes, $2 BILLION. With that megaphone he drowned out the message of all other candidates.

During the interviews and in rallies Donald Trump freely dished out falsehoods. No candidate in US history displayed such complete disdain for facts and relished being indecent and tyrannical. Fact checking site Politifact rates 17% of Trump's statements as 'pants on fire' kind, 34% as 'False', a mere 4% as True. Hillary Clinton, on the other hand, had just 2% rated as 'pants on fire', 10% as 'False', 24% as True. See comparative image below (note, the image, a photoshopped one by another site- just added the images of the candidates- does not reflect today's updated site but is slightly outdated). 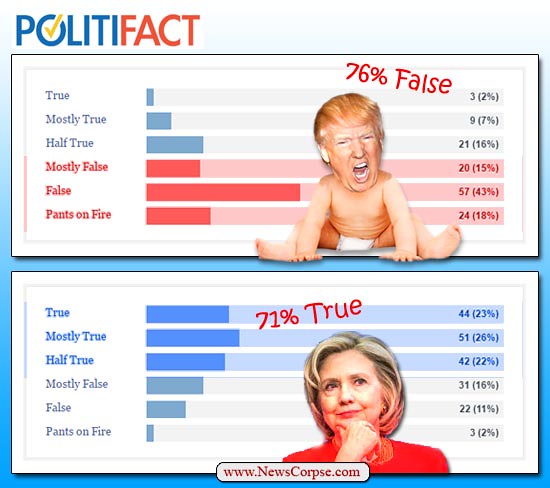 Trump is the master of dark arts in using the media as a vehicle for brazen calumny and sheer falsehoods uttered with impunity. Seeing Trump offer lie after lie after lie while interviewers, partly frozen by the brazenness and partly with a desire to continue having him as guest on their shows, gave a free pass to him. Shows like MSNBC's 'Morning Joe' had a love-hate relationship with Trump.  As Trump defeated one rival after another what was seen as as chimeric carnival became a frightening reality.

Those Trump supporters who lament and rant about negative coverage of Trump need reflect on just a couple of incidents.

Trump threatened to 'spill the beans' about his opponent Ted Cruz's wife Heidi Cruz and linked Cruz's father to JFK's assassination. Not satisfied with that he tweeted an unflattering picture of Heidi Cruz alongside a smolderingly beautiful picture of his wife and ex-model Melania Trump. Not even Mafia thugs behave like that.

Heading into the first presidential debate Trump was running close to Clinton. Baited by Hillary Clinton about his past insulting of a Hispanic Miss Universe Trump tweeted, after the debate, that the former Miss Universe had a sex tape. Of course there was no such tape. A presidential candidate spending critical post-debate period, especially after a disastrous performance, to smearing a woman, that too of having had a sex tape, instead of undoing the damaging performance sent the GOP into apoplectic horror and poll numbers slid.

Trump supporters take pride that their candidate is unlike any other and he does not play by the rules. While Trump mowed down a field of far more experienced politicians with insulting epithets, 'Lyin' Ted', 'low energy Bush', 'short Marco' we were told that once he wins the nomination he'd get 'presidential'.

Contrary to the media being against him the media was ready to call Trump 'presidential' if he referred to Ted Cruz as just 'Ted" instead of 'lyin' Ted'. Coming to the presidential debate if he had just stopped acting like a jerk and used Hillary Clinton's emails as answer for every question he'd have been rated a success. But the real Trump showed up and Clinton lacerated him by laying traps into which he gladly walked and made a fool of himself in front of 84 million viewers.

Coming off a less than stellar but successful convention Trump squandered it all when he went after a fallen soldier's muslim mom on account of her religion for a week.There is no section of America that Trump had failed to offend including a disabled reporter whom he mocked cruelly at a rally.


Trump once boasted that even if he shoots a man down in 5th Avenue in NYC his supporters would not desert him. Fortunately not all of America is like that. His supporters gnash their teeth that Hillary Clinton's emails, stolen and published by Wikileaks, was not given due coverage unlike the quantum of coverage given to a 11 year old tape that showed Trump bragging that he could, as a TV star, grab women by their genitals.

I'll cover Clinton's email scandals tomorrow but suffice it to say that out of the thousands of emails released in a drip-drip fashion every day there is not a SINGLE bombshell. At least nothing that would qualify as bombshell on Trump's scale.

Trump justified his lewd obscenity as 'locker room talk'. Nonsense. More importantly we don't elect a locker room talking lothario for presidency. If as TV star if he thought he could do anything as grotesque as sexual assault imagine what he could do with an office that'd make him the most powerful person on earth. Whether he'd go about grabbing genitals or not he surely would not be above using his 'power'.

The most naked manipulation of the media was when Trump, with great fanfare, declared that he'd, after promoting for years a racist trope against Obama that he was not born in US and therefore unqualified for the presidency, disavow what was called the 'birther conspiracy' in a press conference. Naturally all networks showed up for a live relay at Trump's chosen venue, his newly opened hotel in Washington DC. Only as the camera started rolling did the press realize that Trump was using the press conference as photo op for his supposed endorsers. The networks cut away from the event. Then Trump set a new benchmark for brazenness by claiming, as usual falsely, that Hillary Clinton's 2008 campaign started the slander against Obama and that thanks to him taking up the issue it ended. 'I ended it, ok'. CNN's Jake Tapper summed it up best, "It's hard to imagine this as anything other than a political Rick-Roll". Tapper's collegue John King added, "We got played again by the Trump campaign". I'm sure Trump supporters would relish that the media got played. But the real joke is on the voters.

The very first question that Trump faced in a debate was about him calling women "pigs, slobs" and many other unmentionables. The question was posed by Fox News' Megyn Kelly. Post-debate Trump went on a twitter tirade and called her a 'bimbo' and mused that she posed a tough question because she was menstruating.

Let's not forget that while Hillary Clinton's emails, obtained by hacking her campaign manager's computer, are aired daily by an insidious operator masquerading as an activist lot of Trump's dirty laundry, really dirty, is still protected by contracts and subterfuge. Trump's tapes filmed during his hit reality show 'The Apprentice' is widely rumored to contain real bombshell but neither NBC nor MGM show any interest in airing them. Today there's breaking news that pro-Trump tabloid National Inquirer bought the rights to a story, that alleges a Playboy model had had an affair with Trump, not to publish it but to kill it. So much for the trop that the media is out to get Trump.

While Trump raves about protecting Second Amendment he shredded the First Amendment. CNN had a countdown clock to show how long it has been since Clinton had held a press conference but little talk was made of the shameful fact that Trump had instituted a blacklist of news outlets that had angered him with unflattering coverage. In what could be seen as irritatingly repetitive let me again say that no other presidential candidate got away with such villainy.

Blacklisting media outlets was the most polite thing Trump did. Trump used to call out reporters like Katy Tur of NBC, Carl Cameron of Fox News and the media in general from the podium and let loose epithets, "low life", 'dishonest' etc. His rabid supporters, or those of his supporters that are rabid, would turn towards the press area and gesticulate threateningly. The threats got so out of hand that Wolf Blitzer of CNN recently pleaded with Trump's campaign manager, Kellyanne Conway to tell the candidate to tone it down lest it fatally get out of hand. A prominent news anchor of a very major news outlet is practically begging a campaign manager to stop threatening the press. If this thug reaches the oval office he'll make Richard Nixon look like a gentleman.

Pointing out to a protester Trump said in the "olden days" he'd have been taken out in a stretcher. In contrast Obama today quieted his supporters to allow a protester being escorted away. Seeing the protester wearing military insignia Obama said "we've to respect his service". All my disagreements about Obama's policies and governance aside this contrast could not be any starker.

A complete litany of Trump's thuggery is unnecessary and just the flavor given above should suffice to show that Trump's slide in the polls has nothing to do with how the media treated him. Trump is where he is because of who he is. That applies both to his winning streak in the primaries and now to his struggle in the polls the credit and blame is entirely nobody else's but Donald J. Trump's.
Posted by Athenaeum at 2:37 AM