Holocaust and the Israeli/Jewish psyche

Hollywood found a convenient story in Rwanda and romanticized the story of Tutsi persecution by Hutu's. 'Hotel Rwanda' did not delve into the complex history of the conflict, a history in which Hutus and Tutsis killed each other in turns culminating in a horrific genocide that saw a million Tutsis butchered. Paul Kagame, leader of Tutsi rebels, won a military victory and took office. Kagame later went to war with Congo for purely imperialistic purposes and presided over retributions killings of Hutu's in Rwanda. Yet the world only speaks of the Tutsi dead. Rwanda is not lectured to about learning from its past. If Rwanda was Israel American college campuses would gleefully scold about their inhumanities.

Last year Afro-American mayor and fellow Afro-American legislator of the city of Washington D.C. let loose a racist rant against Asian shopkeepers and Asians in DC. If one did not know the speaker was an Afro-American and listened to the remarks, given the history of USA, one would mistake it for a rant by a white racist. Al Sharpton and Malcolm X were established anti-semites. One protest organized (related to an unfortunate car accident caused by a Jewish driver) by Al Sharpton targeting Jews in Manhattan resulted in the death of a Jew. The Crown Heights riot tore apart Manhattan. Afro-Americans and Latinos (most of who are illegal immigrants) share a testy tenuous relationship in cities like L.A simply because Latino, since most are illegal, lack access to elected office unlike blacks.

Gandhi's India, Putin's Russia, De Gaulle's France, China and more countries indulge in naked imperialistic aggression against neighbors. Yet those countries are not the most scolded in UN. That dubious honor is reserved for Israel.

Do Israeli's and the Jews in general suffer from perpetual victimhood? Is holocaust a convenient 'victim card' that Israel plays? No and No. Never. Ask those questions to the small child who was killed in southern French town of Toulose by a jihadist because the child was Jewish. Ask those questions to the innocent Jews, including both parents of a toddler, who were mowed down in a Chabad in Mumbai by Pakistani terrorists because they were Jews.

For those bleeding heart liberals who say "we condemn those acts but Palestine..." I say 'shame on you'. Not even Indians knew that Jews lived in Mumbai. That were targeted by Pakistani terrorists speaks of how hatred had hijacked a religion. If those same Jews in Mumbai injured any Muslim as retribution for Palestinian intifada would any sane minded person accept that as rationale. We would condemn it unequivocally.

The Jewish people, given their history of being persecuted over 2000 years, have long memories. Scattered around the globe and living amidst hatred they nurtured hope for living in Jerusalem saying 'Next year, in Jerusalem'. The holocaust gave rise to another slogan, 'never forget'. How can they forget? Can Israel afford not to be a hawk? Can Israel depend on international bodies in times of need? No and No.

When Israel pleaded to be left alone after the UN partition the Grand Mufti croaked 'we will push you into the Red sea'. No country, not even US, guaranteed Israel its right to exist. UN abandoned Israel after the partition vote. Having lost 6 million, with no cash coffers of friendly governments, nobody to buy ammunition from legally, surrounded by enemies Israel defended itself in a drama unparalleled in human history. As soon as the British left, as they always do, it was chaos. Armies from Syria, Jordan, Lebabon and Egypt descended on Israel from all sides barring the Red sea side. Golda Meir landed in New York with nothing but a handbag. Ms Meir told the Jews of New York "it is not your choice to decide whether or not we fight. It is ours and we will fight. But it is your choice whether we live or die because we need money without which we will die".

The war of 1967 is looked at as the most pivotal moment in Arab-Israeli history. Israel humiliated Egypt and Syria in a swift and decisive campaign that altered the maps and left a searing wound in the Arab psyche. Egypt and Syria were baying for Israel's blood and Israel lived under the scepter of war and total annihilation. Again, this was a campaign that US did not support or wish to happen. A Syrian paper published a cartoon of mountain of Jewish skulls leaving no doubt as to what would happen to a defeated Israel. 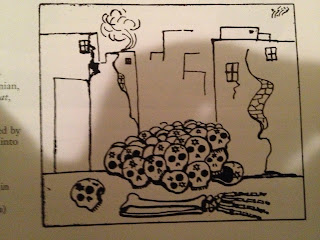 Photo Courtesy : "The Six Day War" Michael Oren
Then in 1970 came 'Black September'. Yasser Arafat unleashed naked terrorism against Israeli athletes who were in Munich for the Olympics. It was terrorism on live relay. Jews were once again threatened on the soil of Germany. While the world ignored this heinous act Israel once again found itself alone battling for the lives of its beloved citizens. No one, not even the US, came to the rescue of those Israelite athletes. In a botched rescue attempt the athletes were killed and the Olympics proceeded on schedule without so much as a pause. Till today in no Olympics are those athletes mourned. If only they had been from any other country.

Today Bibi Netanyahu is reviled as a hawk. How can he not be one after losing his brother in Operation Entebbe. A plane carrying Israelis was hijacked by PLO terrorists. With 106 Israeli lives at stake Israel looked around for help and once again God's chosen people found themselves alone, all alone. In a daring rescue attempt, one for the history books, a commando operation liberated the hostages during which Yonathan Netanyahu was killed. Can Israel afford to rely on world opinion? Can Israel afford to 'forget'? Never. Not in a 1000 years must Israel forget.

Would Sonia have signed a peace treaty with Prabhakaran? Would Putin shake hands with a Chechen leader? Would an Armenian shake hands with a Turkish leader? Yet, Israeli leader Yitzhak Rabin shook hands with Yasser Arafat and paid for it with his life at the hands of a murderous Israeli.

When two sides fail to arrive at a negotiation what would they do? If they asked Yasser Arafat they would launch terrorist attacks on the other sides. The Camp David negotiations shepherded by Bill Clinton, in a desperate attempt to rescue his legacy post-Lewinsky, ended, according to most observers, only because of Arafat's intransigence. To cover up his failed talks Arafat launched the second intifada, a campaign of terror. Ehud Barak conceded more than what any Israeli had ever conceded and Arafat had almost everything he wanted at hand. Arafat who knows only to inflict terror and not to build a nation stomped out. Arafat is no Ben Gurion and both Israel and Palestine pay a price for that.

It was a rich irony for Arab states to move a motion in the UN to label Zionism as 'racism'. This by a bunch of people who run tin pot dictatorships with no semblance of human rights. Israel's ambassador to UN Chaim Herzog in a stirring speech 'hate, ignorance and evil' ripped apart the motion figuratively and literally, watch it here:

Time magazine in a shameful cover asked recently if Israel desired peace. The cover featured an Israeli lounging on a beach side. Israel has forged its destiny amidst an unprecedented sustained campaign of military assaults and terrorist attacks. That a magazine would take the picture of a man at a beach side and wonder if a nation desires peace shows the depths of depravity to which journalism plunged to. Would that same Time magazine, after 9/11, show Americans in revelry and ask "do Americans desire peace"?

America became a staunch ally of Israel due to strategic real politick as Egypt became ensconced in the bosom of USSR. America stands by Israel for its own strategic reasons. Much is made of American aid to Israel. Pakistan practically blackmails America into giving billions in aid without which, Pakistani leaders claim, fundamentalists would run amuck and destroy America. Just last week America released $750 million to Egypt, a country which has no friendly intention toward America. But for America Saudi Arabia would have been overrun by Saddam. What America refused to do for Israel in 1948 it did for Muslims in Kosovo.

Is it an accident that Israel has the largest number of companies listed in the Nasdaq after USA. The book 'Startup Nation' explores how Israel focused on development and human capital amidst the constant fear of death. Warren Buffet is investing in an Israelli company that is within distance of being annihilated by Hamas's rockets. Buffet reasons that he is investing in what the employees are capable of producing not in the brick and mortar that Hamas can destroy.

When Mitt Romney spoke of cultural differences in the context of how Israel and West Bank/Gaza develop the politically correct left wingers erupted in anger. Many were livid that Romney would compare Israel with strife torn, segregated, walled off West Bank. What the critics forgot was how immigrant Jews created Tel Aviv out of the swamps. Israel was nothing but swamps and vast tracts of land unused with pockets of habitation. Israel was built by hand kibbutz after kibbutz. If Palestinian leadership know nothing but terrorism is it Israel's problem?

It is easier to find Jews in Israel who are sympathetic to Palestinian cause than to find a Palestinian who is critical of Yasser Arafat or Hamas. Many Jews in America are now increasingly critical of Israeli policies particularly on the settlements.

All the above notwithstanding it would be in Israel's own interest to help Palestinians realize their own state. The settlement policies are human rights violations and territorial aggressions. It further messes up an already intractable problem.

Just as Gandhi's India is militaristic and Christian West is guilty of every human rights violation on the textbook Israel too is not without blemishes. The blemishes of Israel should be seen as the blemishes of a nation and nothing more. Holding Jewish people everywhere as guilty is anti-semitism. Speaking of Israel's questionable acts as the acts of 'Jewish people' is as silly as speaking of America's militarism as the militarism of Christians. The holocaust is bigger than even the state of Israel. It has universal lessons for all.

Let us all study and learn from holocaust. I wish nothing but peace for the people of Palestine and Israel. May their God's give their leaders wisdom to achieve what has eluded generations for the past half century.

Posted by Athenaeum at 8:57 PM