My Pilgrimage To Auschwitz And The Tragic 'Uniqueness' of The Holocaust

I am not a religious person and therefore the idea of a pilgrimage has never appealed to me. My journey to Auschwitz should aptly be called 'pilgrimage'. It is a trite cliche to say that it is the journey that matters not the arriving. I experienced it as my flight was about to land in Krakow.

As the flight from Berlin entered the airspace of Poland I could see that it was chillier than Berlin. As we landed in Krakow I could see snow. Krakow airport looked like a suburban airport in India. I was now worried whether my light jacket would stand the cold. Then I worried if my baggage would be handled properly or would it be lost on a wintry rudimentary airport in Poland. I consoled myself that I can wear a knitted T-shirt underneath by thick cotton shirt with suede patches and top it off with my jacket to beat the cold.

I've watched so many movies and documentaries of Holocaust and read so many books. I remember how Meryl Streep, in 'Sophie's choice',  stands shivering in the cold on that notorious 'selection platform' in Auschwitz with two infants at hand. Then of course 'Schindler's list'. And then a wave of shame washed me over. Here I am, a healthy guy with credit cards and the ability to buy anything I want at any store in case of emergency. Even if my bags are lost its only an inconvenience for me. In the case of a dire necessity as American citizen I can walk into a US consulate. Millions of women, children, aged and the sick have been dragged to this city in box cars, families have been torn asunder at the whim of a Nazi thug at the platform. The victims were depersonalized, their bodies did not belong to them let alone their possessions. In that one moment I realized why a pilgrimage is a spiritual necessity. Whether one calls it a pilgrimage or a study tour the idea is that nothing, no amount of reading books or watching movies, can substitute for being in a place. Of course a study tour or pilgrimage is useless without the reading and watching prior to that. Only a mind that is pullulating with memories will find that aha moment at a place. Else one would be a mindless tourist sauntering through Auschwitz like one would stroll in a park or a museum.

When our tour guide pointed to a serene innocuous swimming pool like water and asked us "what do you think that is" most thought it was a swimming pool for the Nazis to relax. No. Auschwitz was insured by the company Allianz. As an insurance requirement, like today, Allianz stipulated that Auschwitz should have a pond like place to store water to fight any fire hazard. No book had written about that. Looking at the pond and the memory of millions who died a chill ran down my spine at the grotesque nature of human affairs. 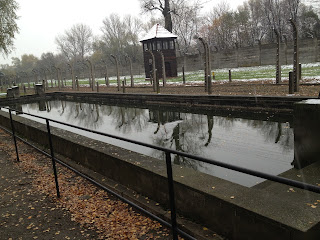 Our tour guide made a penetrating observation that Auschwitz was not a concentration camp but an 'extermination' camp built to kill on an industrial scale. Auschwitz's central location played a key role. A map showed the places from which Jews (and others) were transported to Auschwitz from as far as Budapest. 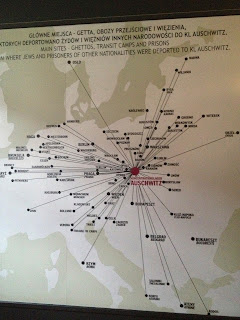 These are insights that become readily available and would take several books to cultivate. That is why a history study tour is essential for students. Next on my agenda is to stand on Edmund Pettus bridge in Selma where Afro-Americans went on a march braving mounted police and police dogs. Several trips like that are pending.

I've often been confronted with the question of whether Holocaust is unique? Being from Tamil Nadu I am also often asked "would you not consider the killings of Sri Lankan Tamils as holocaust, is Rajapakse not Hitler". Of course a Rwandan could ask the same, so would somebody from Darfur. What about an Armenian? The massacre of a million Armenians is still not officially classified as 'genocide', let alone a holocaust. What is so 'unique' about the holocaust? Is it the numbers, a staggering 6 millions? Yes and no.

For any victim in an ethnic conflict his/her tragedy would be, in his/her perspective, the greatest tragedy to befall humanity. I've to respect how a victim feels. A Tamil mother grieving over a child blown to death or a wailing child who had lost both parents or Rwandan who was gang raped and mutilated or a Darfur native who is maimed would all be legitimate in feeling remote to a tragedy that befall a different people decades ago.

It is however the unpleasant duty of a historian to put things in perspective. Let us not forget that from Jaffna to Darfur to Rwanda the deaths and killings were part of and result of civil war with both sides being engaged in an armed conflict. That 6 million Jews were murdered like sheep without a single bullet being fired from their side is indeed unique. That they went to their deaths without a fight has been cruelly used to criticize them or even discredit the scale of the horror.

Syria is burning. UN report says that a million Syrians have crossed over to neighboring countries as refugees. However feeble maybe the efforts of the world in stopping the bloodshed it should be noted that at least the world bodies are 'trying' something and there are nations to open their doors to the refugees. A plaque at Dachau states bluntly "when the inmates at Dachau were liberated most went back to their home countries but the Jews had nowhere to go".

FDR's inaction to bomb Auschwitz is a hotly debated topic. Just last week a new book claims that if the transit lines to Auschwitz had been bombed and if the crematoriums had been bombed it still would not have saved many because allies had the ability to do those only late into the war when many had already been killed. It is 2013 and even today new evidences and new rationale is being investigated in the most complex savagery of humanity.

It is a modern shorthand to refer to any despicable ruler as 'Hitler'. Only Stalin, in reality, matched the cruelty and horrors of Hitler. It is impossible for any ruler of any country to inflict on any race the horrors that Hitler inflicted on humanity at large and at Jews in particular. Doctors, I mean doctors, non-chalantly indulged in medical experiments on Jews. Dr Mengele used to select twin children and subject them to blood curdling medical experiments. Doctors in Berlin thought it unnecessary to wonder how come so many body parts of so many children is turning up for analysis. Dr Mengele had a peaceful anonymous death and never was brought to justice.

Do concentration camps (or the modern internment camps) make up the holocaust? Historian Timothy Snyder in a book review of 4 books writes that it was 'not yet holocaust' referring to Warsaw Ghetto, the laws that prohibited Jews from practically living as human beings etc. In very penetrating analysis Snyder comments that Hitler's murderous scheme was able to take root only because Hitler, in every country he invaded, destroyed every civil institution. In Poland non-Jewish Poles had to be killed first. But in Lithuania which had already been ravaged by Stalin and lost its civil structures Hitler found willing allies in the puppet right wing regime. Close to a 150,000 jews were killed in the matter of a year with Lithuanians being eager to outdo the Nazis and prove themselves as valuable subjects of Nazi state. Death visited the jews in the form of the invader and aided by people who used to be neighbors.

The Nazi regime was an industrial killing machine that took the contours of a holocaust as it brought countries under its jackboot. Stalin had to content himself killing mostly Soviet citizens. Wholesale murder of the Czech or Poles was something even Stalin could not do. Jews were made to pay for the cost of cremating the murdered jews. Snyder writes "Nazi Germany was a special kind of state, determined not to monopolize but to mobilize violence".

Sick minds have caviled about whether it was indeed 6 million who died. Two weeks ago New York Times reported that what we thought we knew of holocaust and the camps is but a fraction of truth according to new evidence. Recent research, gruesomely detailed and verified, asserts that there were nearly 40,000 death camps. Way more than what was thought of.

Only when I planned my trip to go to concentration camps I realized a sobering fact. All the notorious camps were actually close to cities. Dachau is an hour away from Munich, Auschwitz and Birkenau are just 2 hours away from Krakow, Bergen-Belsen where Anne Frank and her sister were killed (not died) is 2 hours away from Berlin, Berlin itself had a concentration camp, Ravensbruck was 90 miles north of Berlin, Buchenwald was near Weimar. The NYT article concludes that given the number of camps it is impossible that people did not know what was going on. At Dachau I saw a photograph of stunned German citizens, dragged to the the camp by allied army liberators, looking over emaciated corpses and the ovens. Were the people of Dachau truly ignorant? I don't think so.

When communist jackboot replaced the Nazi boot in Eastern Europe covering Auschwitz talk of jewish victims was muted as Stalin's regime wanted to speak only of communist victims. That, after nearly 65 years since the camps were liberated, we are still learning and unearthing evidence gives us a perspective of the tragic uniqueness of holocaust. This new knowledge is not an incremental addition to the existing knowledge but it is a paradigm shift that practically enlarged the scope of what was already a too big to digest horror.

Holocaust remains a unique tragedy unparalleled before or after in history. Let us not, juts to rob the Jewish people and Israel, deny this uniqueness and nor shall we wish it upon any people for ages to come.

The one remaining question that I promised to answer was about the lessons from Holocaust that Israel learned. In another perversely unique manner no other tragedy that befall any people draws the question "did they learn from it?". No other people who have suffered are being asked "how different are you from your tormentors". Whenever I speak of holocaust to most people the invariable question is "what about the suffering of Palestine". People are more eager to hold Israel and the Jewish people accountable for todays mess all the more so because of holocaust. In this aspect too, sadly, Israel and the Jewish people are treated uniquely. I'll answer them in my next blog.
Posted by Athenaeum at 10:36 PM