Ambedkar and the Metaphor of Moses

"I confess", Ambedkar wrote in 1941, "that if anything sustains me in my efforts to emancipate the Depressed Classes, it is the story of Moses undertaking the thankless but noble task of leading Jews out of their captivity". Writing for a Bombay publication in 1941 Dr. Ambedkar drew upon the metaphor of Moses to contextualize his own mission in life and the plight of his people, the Depressed Classes, as the Dalits were then referred to. That essay shows a very human side of Ambedkar that we could benefit from exploring to understand his persona. In this blog I've attempted to flesh out a human perspective of Ambedkar. 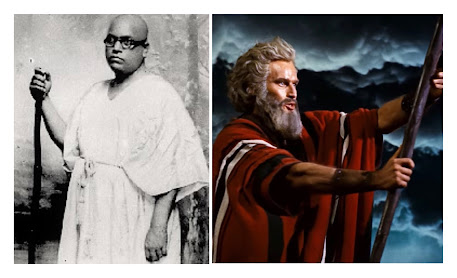 Gandhi and the Bible

Gandhi and Ambedkar rarely saw eye to eye and that extended even to how they approached the Bible and what they took from it for their respective movements. When Gandhi read the Bible the Old Testament "repelled" him. "The Sermon on the Mount", Gandhi wrote, "went straight to my heart". He went on to say "Supposing I was deprived of the Gita and forgot all its contents but had a copy of the Sermon on the Mount, I should derive the same joy from it". Asked to justify his economic philosophy of trusteeship Gandhi reached to a quote from St. Mark, "it is easier for a camel to go through the eye of a needle than for a rich man to enter heaven". 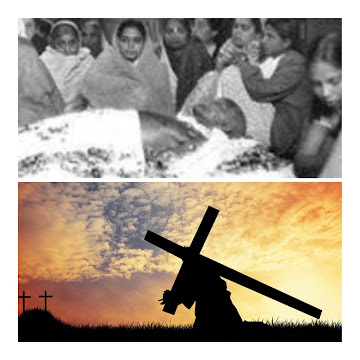 From Romain Rolland to Will Durant to Rev. Martin Luther King Jr. many westerners, theologians and historians, saw a Christ like spirit in Gandhi. Romain Rolland called Gandhi, "another Christ". When Martin Luther King Jr named a society he started after Gandhi he met with opposition for naming a Christian association after a Hindu. King Jr. responded, "what if the world's greatest Christian is not a Christian". Will Durant wrote, "Not since St. Francis of Assisi has any life known to history been so marked by gentleness, disinterestedness, simplicity and forgiveness of enemies".

Two hymns that Gandhi loved gives us an understanding of what he loved best in Christ. "The Wondrous Cross" and "Rock of Ages" both speak of Christ's suffering and salvation. I've often felt that Gandhi's martyrdom that served to largely bring to a halt the murderous communal riots that rocked India was a moment akin to Christ suffering and carrying a cross for all humanity.

For all the admiration for Christ and spiritual succor he drew from Christ's teachings Gandhi remained, till the last, a devout Hindu and a very harsh critic of Christianity itself. In 1927 Harvard's student newspaper The Crimson quoted Dr. J.H. Holmes to who Gandhi said, "I like your Christ, but not your Christianity".

Ambedkar and a Jewish Interviewer

Ambedkar, in Oct 1941, wrote for the Bombay Sentinel, an article titled "Moses and His Significance". The article caught the eye of Maurice David Japheth, the editor of a Jewish monthly publication in Bombay, "The Jewish Advocate". Japheth interviewed Ambedkar in November 1941. While the details of the interview are not accessible the article on Moses' significance is now widely available. The Maharashtra government's archives of Ambedkar's writings (Vol 17, part 1) wrongly identifies the interviewer as one Glora Becher "Consul of Israel in Bombay". Israel was not a nation until 1948 and Google searches of Glora Becher lead nowhere. However, "The Jewish Communities of India: Identity in a Colonial Era" by Joan G. Roland identifies the interviewer as Japheth.

Maurice David Japheth, a Baghdadi Jew, married to a Bene Israel Jew, a controversy by itself, had met Gandhi in Nagpur in 1935 and was drawn to Gandhian teaching of a simple life. Interestingly the Madiga Dalits in Andhra, towards the end of the twentieth century, "declared their affiliation to the Lost Tribe of Israel" and called themselves Bene Ephraim. That story is told is "The Jews of Andhra Pradesh: Contesting Caste and Religion in South India" by Yulia Egorova and Shahid Perwez.

"What did Moses not do for the Jews?", wrote Ambedkar, "He led them out of bondage, he laid the foundation for their religion by bringing the Ten Commandments from Mount Sinai. He gave them laws for social, civil and religious purpose and instructions for building the tabernacle". Here we see a premonition of Ambedkar leading his people to Buddhism, in 1956, complete with vows to be taken.

Writing further Ambedkar recounts the querulous and fractious relationship the Jews had with Moses who had led them out of bondage during the years of wandering in the desert. "Even his (Moses) leadership" was challenged, notes Ambedkar.

Writing in 1941 Ambedkar must have had in his mind the bitter squabbles he had with another Dalit leader, M.C. Rajah, notably during the talks with Gandhi leading to the Poona Pact. On 13th October, at Yeola, Ambedkar had declared that he'd not die a Hindu and advocated conversion for Dalits. Rajah, on 12th November 1935, issued a stinging rebuttal on the need to convert. The rebuttal was noticeable for omitting to refer Ambedkar by name. Rajah went on to list "other leading members of the community" who disagreed with Ambedkar's call. To further rub in his point Rajah compared the efforts of hitherto unnamed Ambedkar with Ambedkar's bete-noire Gandhi. In a declaration on September 18th 1936 an organization named "Harijan Conversion Movement in South India" released a note saying at a meeting that Rajah spoke in resolved that Ambedkar was not a representative for Dalits and further resolved that Rajah was the sole representative of Dalits.

"Moses was not merely a great leader of the Jews. He is a ;eager whose birth, any downtrodden community may pray for". "The leadership of Moses", Ambedkar said, was "a source of perennial inspiration and hope".

I've used the word "metaphor" to refer to what Moses meant to Ambedkar to underscore the fact that the historicity of Moses and the events matter less than what the story of Exodus meant to an Indian leader who was waging war against an ancient and very stubborn evil.

In June 1945 Ambedkar published a stinging book, "What Congress and Gandhi have done to the Untouchables". The book was a harsh critique of Gandhi and Congress. The book opened with a warm and endearing dedication to a person cryptically noted, "To F". The dedication quoted from the Book of Ruth the famous verses Ruth, a Moabite woman, tells her Israelite Mother-in-Law, "Where you go I will go,, and where you stay I will stay. Your people will be my people and your God my God".

Ambedkar reminisces that he used to read the Bible with "F" and that F would be moved by this passage that  expressed the sentiments of a good wife. He added that he used to disagree with her and would quote Prof. Smith's interpretation that that passage distinguishes modern society and ancient society. Ancient society was always "man plus god" whereas modern society, unlike the one in the passage, was just man. Ambedkar is quick to add, "pray remember that in men I include women also". He had promised 'F' that one day he'd write a book on that topic and dedicate it to 'F'. Given how he was drawn into the "vortex" of politics he couldn't write a literary book but he assures this book "not an unworthy substitute" and asks "Will you accept it?"

Who was this "F"? That was an English lady named Frances Fitzgerald also known as Fanny Fitzgerald. She's identified in a footnote to a letter from her to Ambedkar, in the book "Ambedkar's Letters" by Surendra Ajnath (translated in Tamil by S.J. Sivasankar), as an Irish widow and Ambedkar's friend. The letter from Frances, however, has a hint of a  tone of intimacy beyond just friendship. Frances worked in the House of Commons and it was through her that Ambedkar followed the proceedings at the House closely.

When the letters of Ambedkar, including letters from Frances, were sought to be published by Arun Kamble, with the permission of Ambedkar's second wife Savita, his grandson Prakash Ambedkar wanted to quash them says a letter to a magazine (see references). This is not surprising. While Gandhi's Brahmacharya experiments were openly discussed by himself and Nirmal Bose had published a book detailing them it is a topic that Gandhians rarely address. Edwina Mountbatten's letters to Jawaharlal Nehru are still in the custody of Sonia Gandhi. Subhas Bose's marriage to a German lady is rarely mentioned. Frances, in all truthfulness, may have been nothing more than a friend to Ambedkar but she was surely quite a friend he considered intimate.

Why is this discussion of "F" pertinent? Here's Ambedkar about Moses, "Even his leadership was challenged. The Old Testament records that Miriam and Aaron spoke against Moses because of the Ethiopian woman he had married". It is possible that Ambedkar had in his mind the many challenges to his leadership from Dalit leaders and possibly, just possibly, something to do with Frances too.

Leaders like Ambedkar, Gandhi, Martin Luther King Jr et al do think of themselves as saviors in some fashion and that they happen to have the best solutions possible. No leader escapes that hubris and no leader remains a leader if they give it a free run and don't rein it in. Jawaharlal Nehru openly addressed such a fear in an article he wrote. Ambedkarites, with good justification, accuse Gandhi of arrogating to himself the role of sole savior of all Indians. By the same token opponents of Ambedkar said the same of him. This fascination for Moses betrays precisely such a savior complex. I don't hold it against him I am merely acknowledging its presence.

In a way like Moses Ambedkar glimpsed the promised land when he presided over the Constitution committee that outlawed untouchability. However, one doesn't know what went through his mind when he saw the assemble cheer the passage with cries of "Mahatma Gandhi ki Jai". That law punishing untouchability did not uproot the evil all together. That is why I'd say that Ambedkar, like Moses, glimpsed the promised land. Incidentally, New York Times reported on its front page dated April 30th 1947 that on April 29th India's Constituent Assembly outlawed untouchability. The article also noted that "Ambedkar did not see eye to eye with Mr. Gandhi".

In a tellingly analogous manner Martin Luther Kinj Jr., too, wrapped himself in the metaphor of Moses. Speaking to a Church congregation on April 3rd 1968 in Memphis, Tennessee he concluded a poignant and eloquent speech with the words, "I've been to the mountaintop. And I don't mind. Like anybody, I would like to live a long life. Longevity has its place. But I am not concerned about that now. I just want to do God's will. And He's allowed me to go up to the mountain. And I've looked over. And I've seen the promised land. I may not get there with you. But I want you to. know tonight, that we, as a people will get to the promised land". King Jr had seen the passage of Civil Rights Act (1964) and Voting Right Act (1965). He was assassinated the next day. He was just 39 years old.

In a way not even the passage of a law against untouchability was the glimpse of promised land for Ambedkar. It could be argued that his embrace of Buddhism and leading thousands of Dalits into Buddhism on 14th October 1956. This marked the culmination of a long journey of a tumultuous and tortured life of Ambedkar much like that of Moses. He died on 6th December 1956 having glimpsed what he thought was the promised land and passed on the torch to generations that came after.