Boston delivers a message to DC!!!

The city of tea-party, the state that was the crucible of America's birth today redrew the contours of American politics. Massachusetts (MA) today elected a republican as its senator. In more than 50 years no republican has been elected as senator from MA. The election was for the seat held by Ted Kennedy for 46 years. Registered democrats outnumber republicans by 3-1 margin. MA is considered the bluest of the blue states. Often pejoratively referred as an adjunct of left wing Canada. Bumper stickers saying "Don't blame me, I am from MA" are common. Barack Obama carried the state by more than 25 points. Its here that strident left wing populism has at last met its match. Its MA that sent a loud signal to the cohorts of Obama and Obama himself "thus far and no further".
This is an election filled with ironies. At the height of Obama Vs Hillary's heated primaries the Kennedy's came out swinging against Hillary. Many in their clan, with no compunction or sense of irony, called out Hillary on dynasty politics. The greatest irony was Ted Kennedy calling on Hillary to get behind Obama and not scuttle his chances against McCain. This same Ted Kennedy campaigned to the bitter end against Carter, a sitting president. When Teddy was diagnosed with brain cancer and the diagnosis was grim everyone buried their grievances and waited for the lion of the senate to go into the sunset. There is no argument that Ted Kennedy's stellar role in the senate had resulted in a raft of legislation that touched every living American. Sensing that his days were numbered and that he may not be around to deliver the crucial vote needed by Obama for the "health care reform" Teddy in a parting shot recommended to the Gov of MA and the state senate that they amend the rules such that the democratic Gov. could appoint a democrat in his place when he died instead of, as mandated by MA constitution, hold an election. Now MA constitution had earlier been amended to hold a special election to fill a vacancy instead of appointing someone by the Gov. That was done when John Kerry ran for presidency. In order to prevent a then republican Guv appointing a republican in case Kerry won the presidency and had to vacate the senate seat, at Teddy's prodding, MA democrats altered the constitution to hold a special election. That was 2004. In 2009 there were not sure so they decide to reverse themselves. After all, this is politics.
Anyway finally an election was due in April 2010. Martha Coakley, state attorney general of MA was the democratic contestant. Her tenure as AG itself had its share of controversies. Scott Brown, now the most searched Scott in google, state senator of MA, one time nude model for Cosmo, was the republican contender. Martha, leading by 30 points, as recently as Nov 2009, thought she could coast to victory in "Teddy's seat". Along came Scott in a pickup truck who criss-crossed the state and reminded people that it was nobody's seat but the 'people's seat'. While Martha vacationed, Scott and his truck did the rounds. Nobody gave him a chance. After all were not republicans damaged beyond repair thanks to GWB? Republican party was in disarray just a few months ago. What changed in Nov. '09?
In Nov '09 NJ and VA went to the polls for a gubernatorial election. Obama made history by carrying VA, no democrat had achieved that in 40 years. NJ was a democratic leaning state, it was a toss-up in '04 Presidential election when Bush tried to wrest it and failed. In both states the democratic candidates lost decisively despite active campaigning by Barack Obama. It is to be noted that in both states no republican big wig campaigned. Especially in NJ. In both states democrats tried the scarecrow tactics of "Bush-Cheney" to no avail. In NJ incumbent governor Jon Corzine released despicable ads tying his contender with George Bush. Both states resoundingly slapped such tactics with an unambiguous verdict.
By now the tectonic plates in DC were starting to move. In a hurry to pass healthcare reform democrats started acting like Tammany Hall bosses of yore. Deal after deal after deal was struck with individuals in closed door sessions, bills were padded, unions were humored, threats of taxing the super rich to no end were freely flaunted. Obama got his comeuppance. Obama's magic in winning the election was portraying himself as a new age messianic-politician above the dirty rumble tumble of political skulduggery (forget it that was forged in Chicago politics). Now the independents and youth who worshipped him were dumbstruck.
The final straw was delivered a week back when the boss of AFL-CIO threatened the democrats with severe backlash if their super-generous, employer paid, health plans were taxed. He suggested instead to, well what else but tax the rich. He and the democrats were banking on the residual anger in the populace against the rich for the economic crises. But somewhere the American public decided the stench of such deals was repulsive enough and decided to stop "socialism run amuck" in its tracks. Along came Scott Brown in his pickup truck. He just did hard boots on the ground campaign, promised to derail socialism, did not bring any republican big wig but just locals to campaign. The mood of the country and MA voters turned in Dec.
Obama and his cohorts were still in la-la land. Dana Milbank, Washington Post correspondent, wrote a prescient article in today's edition that merits a lengthy quote:
"One salutary result the Senate election in Massachusetts could have for Democrats is it could wipe the grin off Robert Gibbs's face.

The Democrats' panicked struggle to hold onto Ted Kennedy's seat in the liberal state had, whatever the outcome, showed how badly the party's brand had been damaged over the past year. But as the White House press corps challenged President Obama's press secretary on Tuesday afternoon, Gibbs answered with his usual mix of wisecracks and insults.

"Broadly speaking, can you talk about the difference between 59 and 60 votes in the Senate and what that means for the president's agenda this year?"

"Broadly, it's one," Gibbs answered.

Will Obama hold a news conference Wednesday to discuss the results?

"Be here around 10 a.m. If we're not here, start without us."
Whether it was Gibbs, the White House spokesman or Martha or Obama himself, complacency and arrogance compounded each other until this past week. Finally Martha woke up.
The democratic party sent its stars one after other capping it with Bill Clinton and Obama himself. As Milbank trenchantly observed, "This is the most visible manifestation of a larger problem the Obama White House has. Many Obama loyalists from the 2008 race still seem, after a year on the job, to have trouble exiting campaign mode. They sometimes appear to be running a taxpayer-funded rapid-response operation".
I am very thankful for the voters of MA for having sent this message to DC. If the voters of MA could be swung thus one can only imagine the seething rage in the rest of the country.
Posted by Athenaeum at 12:02 AM 1 comment: 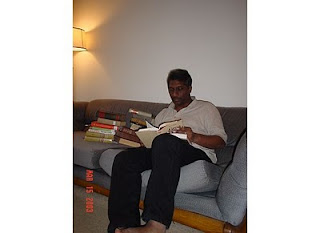 On a wintry Friday evening I sat down to browse my netflix (online video rental) queue. Netflix now even streams movies on to PC, one recommendation that popped up was "84 Charing Cross Road". I had seen that charming movie 6 years back. Its a movie that any bibliophile could relate to. An aging script writer, Anne Bancroft, in search of old used books comes across a book seller in London. She writes to them asking for cheap used editions of books, some out of print. Anthony Hopkins, an employee at the store, starts a correspondence. The mails talking about books is so charming. William Hazlitt's essays, Pepys diaries, Cardinal Newman's book on universities, Elizabethan poetry, John Donne's Sermons, Bible in Vulgate Latin so much much more. I checked out a few in my local library. Hazlitt sounded familiar from my high school reading, when I googled him I found that his essay "on the pleasure of Hating" is most famous (http://www.blupete.com/Literature/Essays/Hazlitt/Hating.htm).
The movie starts in post war years and just like "Holland's Opus" gives vignettes of the times, the meat rationing in post-war London, coronation of Queen, student protest in Columbia University, NY etc. The literary and human quotient are well served. The books are discussed in pretty literary fashion, Bancroft's irritation at a not so good publication of "Pepys diaries", her derision of Shelley & Keats romanticism give an edge to the movie. Seeing somebody who selects books like a wine connoisseur is pretty warming. Receiving a book she waited for long she remarks that it should be read sitting in a nice leather chair by the side of a fireplace and not sitting in cheap furniture as she has to do.
Bancroft starts sending X-mas presents to Hopkins and his team. She sends rare to get meat and food. Each employee in the store becomes dear to her, all send her correspondences, even Hopkins family becomes dear to her. She sends nylons from Saks to his family. Bancroft yearns to visit London, when she gathers enough money she suddenly has to spend it on expensive dental treatment thus disappointing Hopkins. One fine day she gets a letter that Hopkins had died and that the store itself might close. She then decides to go to London, wanting to see 'literary London'. The movie closes as she walks into a dusty empty store and saying "Frankie at last I am here". Its no epic movie but worth a watch.
Not wanting to see it on PC I checked online if my local Barnes & Noble store might have a copy.Yes they did, I hurried there and bought it. To my joy it was only $9, while it was retailing at $13 online. Came home, stretched out and watched it one go. By the way during my visit to London in 2003 I made it a point to go see Charing cross Road.
My side thoughts are related to used book stores. Right from my days at Chennai and Tanjore I loved the used book stores. In Chennai & Tanjore they were more roadside stuff. I've discovered sheer gems in them. Will Durant, Russell, Koestler, rare books of Irving Wallace (book about how he wrote 'The Prize') etc were all discovered there. In New Jersey close to my home are several used book stores. The best used to be "Micawber books" opposite Princeton University. "Micawber' was run by someone who loved books unfortunately they had to close because they could compete against online retailers like Amazon. Lambertville is a quaint town bordering NJ and Pennsylvania that had a wonderful used book store. I just love finding the hidden treasures in those stores. Raleigh, North Carolina is another treasure trove due to the Universities (Duke and Univ. of NC). The picture above is from one such haul at Lambertville, almost 7 years ago.
Posted by Athenaeum at 11:01 PM No comments: