A Historian Reflects on the Meaning of Good Friday

Quintus Lucilius Balbus (c 100 BCE), quoted by Marcus Tullius Cicero, said, "To sum up, the existence of the gods is so abundantly clear that I regard anyone who denies it as out of his mind". Voltaire famously went to war against the Church but insisted that "if God did not exist it'd be necessary to invent him". India's own Jawaharlal Nehru, an atheist, understood that "religion had supplied some deeply felt inner need of human nature, and that the vast majority of people all over the world could not do without some form of religious belief". Religion, irrespective of whether you practice it or not, is a subject to be engaged with.

While religion or its practice has little value or interest for me I am always fascinated by how the philosophical upper reaches of religion captivates human minds, minds that I tend to respect for their intellectual breadth. Thanks to my father, a devout Christian who took pride in calling himself a 'humanist', I've a healthy appreciation of the religious instinct and a definite distaste for bigotry. A person's religion is his own private matter as long as it does not color his profession, whatever that may be. When I came across Pulitzer winner and historian Jon Meacham's "The hope of glory: Reflections on the last words of Jesus from the Cross" I was intrigued to read what a person like him could say on a matter of faith. 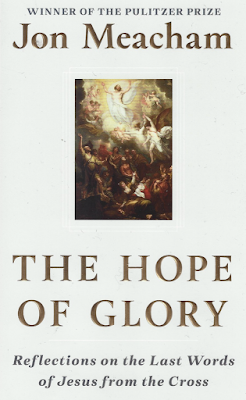 Tamil writer Jeyamohan recently ruffled quite a few feathers with an article addressed to a skeptic of Hinduism. As is his wont Jeyamohan did not stop with making the case for Hinduism but happily extended to offer prejudiced criticisms of Christianity and Islam based on partisan cherrypicking of history. Meacham's book, a slim one, that had hitherto been gathering dust on my bookshelf, became an urgent need to be read and contrasted with Jeyamohan's style of writing on religion.

Meacham declares in his prologue. "I am, however, in no sense an evangelical, for I do not share the view that faith in Jesus is the only route to salvation, nor am I determined to convert others to my point of view". As a biographer of Thomas Jefferson, the president who most notably laid the foundations of secularism in America, Meacham quotes the sage from Monticello, "It does me no injury for my neighbor to say there are twenty gods, or no god".

So, why did Meacham bother to write this book? "I am sharing these meditations in the hope that a sense of history and an appreciation of theology might help readers make more sense of the cross". Meacham walks a tightrope as a historian, his known avocation, and a man of faith, his private world that he is now opening to wider and open scrutiny.

What is history and what is theology? Meacham answers, "History is what happened in time and space. Theology can be understood as what people think history means in relation to a presumed order beyond time and space". "History is horizontal, theology vertical, and their intersection is a motive force behind our religious , national, and personal imagination."

To Meacham the crucifixion and the existence of Jesus is factual but he is comfortable in referring to the last words of Jesus as "may or may not have been spoken". The crucifixion is to Meacham, "a reminder that at the center of the Christian story lies love, not hate; grace, not rage; mercy, not vengeance". India's Mahatma, a devout Hindu, saw the same message as the heart of Christianity and was moved when he visited the Sistine Chapel.

The life of Jesus, if we were to accept the narrative of the Bible, is very unlike most other Gods. The life of Jesus is bookended by helplessness. He's born in a manger and the people who know of his birth are nomads. He dies, flagellated and nailed to the cross. He preached a religion which rewarded the poor, for being poor and the weak for being weak. No wonder Nietzche, preaching a gospel of strength, repudiated Christ.

The "Last words of Jesus" are meditated upon by the faithful on Good Friday. It is a day of reflection of what Christ and Christianity mean to each of them and to society at large. Jon Meacham offers us his reflections.

Probably the most famously known words of Jesus are "Father, forgive them; for they know not what they do" (Luke 23:32-38). The crucifixion is a foretold event and Jesus was fulfilling a prophecy and in essence His mission on Earth. If crucifixion was a prophecy then perforce there should be the executioners who were merely playing their parts in a drama orchestrated from beyond human realm. The immortal Bard of Avon had the blind and desperate Earl of Gloucester lament, "As flies to wanton boys are we to the gods".

If the Roman executioners were playing out their parts did they need to be forgiven? The last words of Jesus, seven phrases, are spread across the various Gospels and this, the first, come from St. Luke. Meacham reasons that Luke included these lines not because Jesus perhaps said them or that the Roman executioners needed forgiveness. The gospels were written, supposedly, decades after Jesus's crucifixion and were addressing a different audience. Luke, by ascribing these words to Jesus as he hung on the cross, was meant to lift the sense of guilt that his Jewish and Gentile audience might have for what their forefathers did.

Rejecting the notion that scriptural text is to be read literally Meacham exhorts us to "engage with the texts of the faith with reason, a critical intelligence and a capacity to distinguish history from legend, narrative from allegory, and fact from apologetics".

Two stories from Indian mythology always strike me for their similarity with these words of Jesus addressed to his mother. Philosopher extraordinaire Adi Shankara, a sanyasi, sensing that his mother is ailing rushes to her side to be with her as she draws her last breath. Tamil devotional poet Pattinathar also rushes to be with his mother at her death and famously, instead of cremating her with wood, lest it hurt her, sets the pyre alight with verses.

As a Child Jesus admonishes his parents who come looking for him, thinking he's lost, that he's "about his Father's work".  Yet, as life ebbs from him and hanging from the cross he looks down and sees his distraught mother. Like a man taking care of his family that he leaves behind he speaks to his mother, referring to his disciple John, "woman, behold thy son" and to John he says, "Behold thy mother" (John 19:25-27). To Meacham this act of a dying man showing love to another person and not himself is an act that Jesus wants his follower to, well, follow. 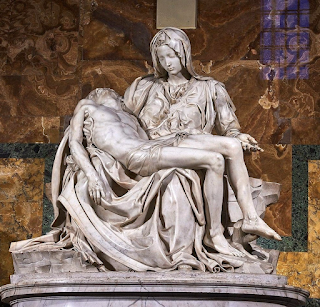 That a man whose skin had been shredded to His bones and nailed to the cross would spare a thought for others might strain the credulity of any listener and Meacham concedes, "you may well find that the whole story is not something you can accept". Then he assures us that we share company with none less than Benjamin Franklin himself.

Franklin, writing to Ezra Stiles, President of Yale, confesses his belief in "one God, creator of the Universe". "The most acceptable service", Franklin continues in the letter, "we can render him, is doing good to his other children. That the soul of man is immortal, and will be treated with justice in another life respecting its conduct in this." Franklin then tips a hat to other religions, "These I take to be fundamental principles of all sound religion, and I regard them, as you do, in whatever sect I meet with them".

America's founding Father aside from casting aspersions that Jesus's message, with the passage of time and other factors, would've been corrupted voices what could be blasphemous doubt about the very divine nature of Jesus. "I have....some doubts as to his divinity; though it is a question I do not dogmatism upon". To Franklin the divinity of Jesus is doubtful and not even a pre-requisite to value his teachings or following his teaching of brotherhood and doing good to others.

"Into Thy hands I commend My Spirit"

It is this moment of surrender that to Meacham is a call to all Christians to "committing ourselves to a habit of mind and of heart that tends toward love and order rather than selfishness and disorder". Willam James, Meacham says, "put it well, saying 'We and God have business with each other; and in opening ourselves to his influence our deepest destiny is fulfilled".

Leap of Faith and Hope of Glory

Meacham calls forth the reader to "seek the means of grace, and the hope of glory" irrespective of which God you choose to worship. Seeking grace is all there is to it.

Meacham further presses his case for faith by calling forth the mathematician Blaise Pascal (1623 - 1662). Pascal argued, in Meacham's words, "It is smarter to bet that God exists, and to believe in him, because if it turnout that he is real, you win everything; if he is not, you lose nothing. So why not take the leap of faith.

Jon Meacham sets himself a tall task in a field populated by intellectual giants of the highest order and writers of great merit. Writing about Christianity and what faith means for an audience of common reader has a very long tradition that includes the likes of G.K. Chesterton, C.S. Lewis, William James, to name a few. Then in recent years we have highly regarded writings of Elaine Pagels and Jack Miles who approach the question of religion and God from academic perch. Meacham, for all his erudition and culling of quotes from a vast repertoire of theologians and poets pretty much loses steam after the second or third "word of Jesus". History, not theology, is Meacham's forte.

Of course one could say that the book is meant for the faithful and it'd fail to strike a chord in a secular reader or an agnostic. Fair enough. But Meacham set himself out "not to convert" and hence the aim to impress upon the reader, the meditative truth that the author found, in language that appeals to the mind in such a way that the reader could at least say, "if I were faithful I'd enjoy this more". On that Meacham fails.

Now, once we cross the Western academic nature of writing that Sarvepalli Radhakrishnan and S.N. Dasgupta did and we reach particularly the likes of Jeyamohan who have a cultivated animosity for the Western intellectual tradition we find that the writing is not just uneven but lacks a balance. The writing suffers from an eagerness to court a reader to join the fold and despite any good intention to keep the courting positive it inevitably lapses into enveloping irrelevant negativity. Meacham, who functions as secular historian, while being faithful member of the Church, is still trying to speak to a secular reader. Elaine Pagels, historian of the Gnostic Gospels, is sympathetic to the religious instinct but is careful not to sound like a televangelist. Jeyamohan's problem is he tries not to be a televangelist but his impulses get the better of him. Sad.

Posted by Athenaeum at 10:13 PM No comments: