America's and Obama's Moment of Glory

Its Diwali time in America. Its the one metaphor that can capture the mood of the country. America has slain a beast that had brought unfathomable destruction to lives and the American way of life. 9/11 has a very personal meaning for me. Our family, my wife in particular who worked in Wall Street, endured unspeakable horror and anxiety. That was a day, as an Indian, I felt comforted that I was in America. I was sure that my wife would reach home safely. Volumes have been written about that day, Giuliani becoming America's mayor, the steely resolve of New Yorkers, civilians committing suicide to foil the plans of barbarians and so much more. I shall not rehash those now.

My favorite columnist Lance Morrow wrote a vitriolic column in Time laying out the "The case for rage and retribution' . "A day cannot live in infamy without the nourishment of rage. Let's have rage. What is needed is a unified, unifying, Pearl Harbor sort of purple American fury, a ruthless indignation that doesn't leak away in a week or two" and Morrow asked Americans to "relearn why human nature has equipped us all with a weapon (abhorred in decent peacetime societies) called hatred". In prescient words he closes, "the worst times, as we see, separate the civilized of the world from the uncivilized. This is the moment of clarity. Let the civilized toughen up, and let the uncivilized take their chances in the game they started".

All these years many have mocked that America, with all its technical glitz and unparalleled power, could not bring to justice one individual. Not many realized that the America we see in movies is not the America in reality. This escapes even the well informed many times. Very coincidentally Time magazine's cover story for this week is Robert Mueller, chief of FBI. The story highlights that  prior to 9/11 FBI did not have agents devoted full time to gather intelligence. Today there are 580 in a new category devoted for intelligence. Now consider tracking a fugitive like bin-laden (in the domain of CIA) who does not use any modern amenities that can be tracked or hacked. Add to that the fact that he lives amidst his fellow tribesmen of undying loyalty. Now compound it with other bizarre facts like not having, almost nil, 'humints' (human intelligence agents), zero agents who even knew rudimentary Pashtun, the language of the fugitive. On 9/11 Bush realized the archaic nature of communications equipment aboard Air Force One. After the demise of communism America took a well deserved holiday and basked in the glory of being not just the super power but a hyper power where the second in line was so far behind that it did not matter. 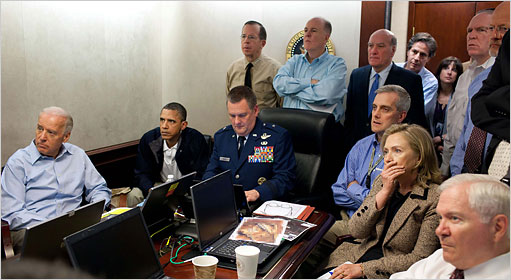 I found the picture above (From NYT) very interesting. Its a photo of the scene in the situation room at the White House. The President of USA is sitting on the side while some military person is sitting at the head of the table and conducting the operation. Malcolm Gladwell in his book "Outliers" talks about America has one of the lowest "power distance" equations where people are more comfortable approaching or challenging a superior. This is important when results matter.
This killing does not mean that the hydra headed terrorism is finished. Far from it. This is a pivotal turning point. A powerful symbolism but only a symbolism. It is elementary knowledge that Al Qaeda has many local variants across the globe and they are still very much alive or awaiting to come alive. Obama reiterated that. Every sensible columnist has cautioned on triumphalism.
The picture below says it all. I pass through this place every week.
Posted by Athenaeum at 12:36 AM