Brooklyn Book Festival: The Far-Left Exposes The Left On Obama


I attended the just concluded Brooklyn book festival. The festival was a complete domination of authors in the left and far-left with not even a nod to accommodating any opinion from the center-right let alone the conservative right. The book stalls and the audience were firmly in the radical camp. A conservative would be an endangered species there. The most interesting part of the day was the interplay between Obama loving authors and leading critics from the far left

Far left Marxist author Tariq Ali scolded the liberals "if a Republican president had killed an American citizen (referring to Anwar Al Awlaki) without due process using drones would you be quiet". He asked why liberals are silent about Obama's use of drones abroad and at home. Mr Ali wondered what moral authority liberals would have to scold a republican president in case Romney gets elected and pursues what are commonly thought of as republican policies of national security. To rub it in Mr Ali added, for effect, Obama acts like what one would expect of Putin. OUCH. 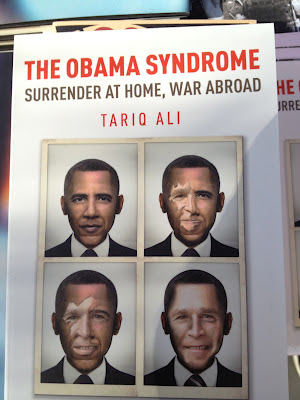 The discussion featuring Gail Collins, from NYT, Jodie Kantor, author of widely praised and very Obama sympathetic bestseller 'Obamas' and John A MacArthur was the most revealing for sheer fireworks.

The discussion opened with a question about what good does a long election season do for the people with regard to knowing the candidates. Gail Collins, working for New York Times and therefore a confirmed Obama sympathiser dived right into the video of the season. A surreptititously taped Romney talking to fundraisers that 47% of voters do not pay taxes and therefore will vote only for Obama as Romney's message on tax cuts has no relevance for them.Romney is right and that too only partially. It was a bad statement and one that might cost him the election. The Brooklyn audience tittered in agreement.

John MacArthur expressed disappointment that Obama broke his promises on renegotiating NAFTA and raising dividend taxes to 25%. MacArthur chided the liberals for focusing on Romney's much debated 15% tax rate on $22 million income but giving Obama a pass on his failure to raise the taxes on dividends when he had the majority control to do so. MacArthur also added that Obama was told sternly not to do so by Democratic party big-wigs because that tax increase would alienate their rich donors. He also flung the gauntlet to Gail Collins asking her to write a column on that. When Obama launched his attack ads on Romey's private equity career many Democrats distanced themselves from attacking an industry that was a rich source of donations. MacArthur alleged that the famously foul mouthed and self-confessedly vindictive Rahm Emmanuel was the 'enforcer to sideline the more radical elements within the party. He asked "where is Howard Dean today? why do we not hear a protest at redistricting Kucinich's constituency?"

Jodi Kantor then opened a can of worms with what she thought was a profound observation. Kantor said "Obama came into office with no experience, no foreign policy experience, no senate experience, no governing experience and yet he is very reluctant to talk about his 'learning curve' in the Presidency. Obama does not open up on talking about what he learned as President". I was stunned to see a columnist and author basically say that Obama had no experience and stumbled into office. Her naivete in expecting a sitting president to talk about 'learning curve' during campaign season is simply breathtaking.

All three talked of the debt ceiling fight last summer. None mentioned the fact that Obama, as senator, happily voted against Bush's request to increase the debt ceiling. He reasoned "the President had the requisite votes so I felt free to cast a 'no'". Bob Woodward in his book "Price of politics" and his interviews thereafter chided both sides for the brinkmanship. Woodward had tougher words for Obama though for failing to lead and to use the office of the presidency to lead. None mentioned any of that.

MacArthur spoke of how much Obama was ready to cut in entitlements. True, but MacArthur did not add that Obama was ready to cut until he discovered that his own party will not go with him. MacArthur then added how Obama cold shouldered a Dennis Kucinich sponsored bill to raise minimum wage, a pet cause for leftists. Never mind that even liberal economists have debunked the theory of minimum wage. That a democratic President fails to even mention it in campaign speeches was MacArthur's point. He finished with a sting "Obama is not there for working people".

Kantor felt compelled to join issue and opined "I disagree with that". She narrated how Obama grew up in poverty (so did speaker and GOP rep John Boehner). Kantor then trotted out the famous excuse of liberals "he is not good at communicating to people and translating policy into a speech that people can relate to". Liberals want to have to have the cake and eat it too. On one side they are breathless about his eloquence and in the same breath add that he is not good at explaining policy to people. So, is eloquence to be defined as stringing empty rhetoric and unconnected to articulating ideas to a skeptical audience?

Not satisfied with excusing Obama's unpopularity to a simple messaging issue Kantor continued that Obama loves dealing with 'intellectual complex issues' where there are no clear options and any course of action come fraught with political problems. She cited the auto-bailout and killing of Osama. Basically she echoed Vice President Biden's famous bumper sticker phrase 'General motors is alive, Osama is dead". The implication being that the other non-complex issues do not interest the President. The president hates 'retail politics' we were informed. Collins added 'he looks down on retail politics'.

MacArthur sliced that excuse "if he dislikes politics so much and dislikes working with congress, including his own party, why is he the President?". Kantor jumped in to say "I spoke to Robert Gibbs, he said if you ask 'Michelle Obama a hundred times if he should run for the Presidency she would reply a 100 times 'No'". MacArthur sneered "Robert Gibbs was the White House spokesman and you would expect him to talk like that". No self-respecting journalist would take a spokesman's word as character witness.

I don't know what was intellectual and complex about bailing out Detroit which has hundreds of thousands of votes for Obama. The process of the bailout was nothing but a write off of Detroit to his union buddies. Wall Street bailout returned money to tax payers. Detroit bailout has tax payers still on the hook. Ask Ford and Alan Mulally over how the bailout was a giveaway to the unions.The killing of Osama was a brave gambit. But it was more tactical than a question of policy. Any American president would have gambled that. Kantor basically said that talking about jobs, deficit etc are 'unintellectual' for this supposedly intellectual president.

Both Kantor and Collins spoke of how Obama tried to be bi-partisan and failed. MacArthur sizzled in response "McCain sponsored a truly bi-partisan bill with a democrat to re-instate Glass-Steagall act and Mr bi-partisan refused to sign or lobby for that bill". I wish MacArthur had drawn a contrast citing how Bush worked with his ideological nemesis, Ted Kennedy, to reshape how America educates its children. Bush, a Republican, signed into law the bipartisan Mcain-Feingold bill that attempted to reform campaign finance.

Collins then imitated Harry Reid and said how this Congress was stymied by 380 filibusters compared to just one during Johnson's presidency. She also added that Obama hated working in the Senate. MacArthur shredded that excuse asking Collins to "read Caro's biography 'Master of the senate' to learn how LBJ worked with the senate to achieve his goals. That is why he could get things done". During 2008 campaign Hillary Clinton said "you campaign in poetry but you have govern in prose" and cited how LBJ shepherded the civil rights bill through the congress. She was right as Robert Caro detailed in his magisterial yet to complete 4 volume biography.

Jodi Kantor joined saying "Obama prefers being community organizer" and that "he does not belong to the  political machinery". MacArthur became livid and demolished that detailing how Obama was very much a part of Chicago's Democratic political machinery especially the much feared Daley's political machine. Obama broke with his controversial pastor only when the pastor committed the unforgivable sin of calling Obama "just another politician" in a widely telecast national TV press conference. Obama guards his "I am no politician" image with a zeal.

I will never agree with MacArthur or Tariq Ali, especially on their tirade against free trade and capitalism. Do I cheer their criticisms of Obama just because I disagree with Obama? No. Those are all criticisms I've articulated too. When it comes from the far-left camp it carries a heavy stamp. What is noteworthy is MacArthur is tearing down the image building by two journalists who are more intent on giving excuses for Obama instead of holding him accountable. Mr Ali is shining an inconvenient spotlight on the hypocrisies of the left and it carries a moral weight when he utters those words instead of coming from Obama's habitual ideological opponents.

I congratulated MacArthur for holding Jodi Kantor and Gail Collins to account. With Kantor, in ear shot, I told MacArthur that she was a disgrace to journalism.
Posted by Athenaeum at 9:42 PM