September 5th is celebrated as 'Teachers Day' in India commemorating, philosopher-statesman, Sarvepalli Radhakrishnan's birthday. A recent trend in Tamil Nadu, amongst vitriolic Brahmin haters like Suba. Veerapandian and Mathimaaran (a blogger), is to write derisive blogs about Radhakrishnan questioning whether Sep 5th should be celebrated as Teachers Day. Sep 5th also happens to be the birthday of Tamil freedom fighter V.O.Chidambaram Pillai. Mathimaran asks mischievously if Sep 5th is celebrated for Radhakrishnan because he is a Brahmin and is VOC forgotten because he is non-Brahmin. 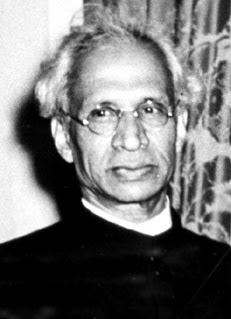 This year Mathimaran spewed venom in reaction to a column that appeared, in a non-Brahmin owned favorite of DK/DMK rag sheet (Dinathanthi). The columnist had cited an anecdote about Radhakrishnan consoling a sick Joseph Stalin. The columnist wrote, 'Stalin, a man who instilled fear world was moved and said "you are the first person to treat me as a human being"'.

That Stalin was referred to as a monster irritates Mathimaran beyond words. He proceeded to cast aspersion on the anecdote, not based on counter evidence, but purely on conjectures. Mathimaran bristles that Stalin, loved within the communist party and by all Russians, had thousands who would give their life for the leader and that Stalin was in no emotional need of being consoled by a reactionary Brahmin. Sarvepalli Radhakrishnan, Mathimaran alleges, is nothing but a reactionary Brahmin who shored up support for Hindu philosophy and legitimized it in the eyes of the West.

There are two biographies of Radhakrishnan. One, by K.Satchidananda Murty and another by his own son S.Gopal. Both Murty and Gopal's accounts agree on most details but it is Gopal, the historian that he is, gives the more accurate account.

Radhakrishnan had an interview with Stalin in 1952. India had just then resolved the unification issue of Princely states. Stalin advised Radhakrishnan on how to implement socialism in India. Referring to the landlords Stalin said "liquidate, Mr Ambassador". Stalin prefaced it with a gesture of chopping. At the end of the interview Stalin comes over to Radhakrishnan and Radhakrishnan, as is his practice pats Stalin on his cheek. Later Radhakrishnan would do the same to Mao. This is where the accounts slightly diverge only to conclude identically.

In Gopal's account Radhakrishnan expressed hope that Stalin too, like Asoka, may have a change of heart and become a man of peace. He then quotes Christ about gaining the world while losing the soul. Stalin responded 'I too was a student of theology once'. Later Pavlov, the interpreter, told Radhakrishnan that after he had left Stalin remarked "he is the only man who treats me not as a monster but as a human being".

In Murty's account Radhkrishnan recounts the said remark as if Stalin said in his presence. Essentially the remark stays in both accounts.

I'd choose Gopal's account simply because he was a scrupulous historian who wrote an unsparing biography of his illustrious father. Gopal's biography starts with an explosive paragraph where he not only casts aspersion on the fact that Sep 5th was his father's birthday but more importantly asserts that his father might have the illegitimate offspring of his grandmother and another learned man not his grandfather. The tryst was supposedly arranged by Radhakrishnan's own uncle (brother of his mother). Gopal also does not shy away from the fact that Radhakrishnan was a philanderer who had marital affairs with many including his servant. Gopal's integrity in writing about his father is something that Mathimaran can never imagine possible. I'd love to hear from Mathimaran the dalliances of his mentor E.V.Ramasamy Naicker.

Radhakrishnan, chosen to be Spalding professor of Eastern studies in Oxford, did not just peddle 'Hindu' philosophy. He gave Indian philosophy a legitimacy as a philosophical discipline rescuing it from its religious confines. With his encyclopedic understanding of Western philosophy Radhakrishnan helped the West understand that the Upanishad is not theology but philosophy. He was invited to lecture at the finest universities in the world. To drive it home let's be clear that Kanchi Kamakoti Chandrasekarandra Swamigal would never be invited to be Spalding professor.

Indian Philosophy, or 'Hindu Philosophy', is a treasure of a great civilization. Only intellectual boors like EVR and Mathimaran would prattle about throwing it away. No westerner would throw away Plato, because he was undemocratic or Aristotle, because he was Alexander's teacher. Nietzsche's philosophy was hijacked by the Nazis but Nietzsche is still taught in the West. As much as I admire and laud Radhakrishnan for his expositions of Indian philosophy I am well aware of how Indian philosophy is straitjacketed as Hindu philosophy and twisted to fit Hindutva political agendas today.

Responding to Radhakrishnan's claim that Hinduism has survived for thousand years despite opposition EVR, Mathimaran quotes, is supposed to have asked "the cockroach too survives for a millennia shall we now revere the cockroach". As a tool of rhetoric its passable logic. But the choice of the cockroach analogy only illustrates, at a Freudian level, EVR's vituperative hatred of Hinduism. What if the same was asked of his Dravidian exceptionalism?

V.O.Chidambaram Pillai is an illustrious son of India and one of our bravest freedom fighters. The man chose to sink his wealth and challenge the very root of British power, maritime supremacy. After his gruesome incarceration he died in penury a broken man. I heartily agree that his memory should be commemorated. To be frank too, but for SubaVi and Mathimaran I'd not have known that Sep 5th was VOC's birthday too. I knew of Radhakrishnan's birthday just as I knew of Nehru's birthday (Nov 14th) because those days are holidays for school. I, just like millions others, did not learn of their birthdays because they were Brahmins.

Suba.Vi and Mathimaran crying for VOC is like the wolf crying for the sheep. VOC, a rich upper caste man, was a devout Hindu who spent his last years translating Bhagvad Gita and other Hindu texts into Tamil. If in a hypothetical world VOC was being celebrated these same people would shout from rooftops that VOC was a Hindutva in the nationalist clothing. Of course they would then extend it to their usual hate filled speeches of Brahmin-Bania dominance.

It is a tragic fact in India that many, many illustrious freedom fighters other than Nehru were completely overshadowed because, at Delhi, the Nehru clan holds power. In Tamil Nadu other than lip service to VOC and Kamaraj the Dravidian politics has scrupulously, out of hatred for the freedom movement, has overshadowed the immense sacrifices of our great sons and daughters. Most Tamils learned to love VOC only because legendary matinee idol Sivaji Ganesan made a biopic of him. I've read that VOC's son met and thanked Sivaji for that. Later Sivaji also funded a memorial for VOC.

Speak of Rajaji and Mathimaaran will froth at his mouth about 'Kula Kalvi' (hereditary education) without any acknowledgement of the fact that Rajaji was a freedom fighter and organized the famed Vedaranyam Salt march.

Speak of Bharathi, a poet who resurrected and revolutionized Tamil poetry, Mathimaran and his ilk will prattle about his caste and his Hindutva with no mention of him as a reformer and a person who dreamed of a unified India where all live in harmony.

Every year Suba.Vi and his fellow DK/DMK leaders visit the cemeteries of Annathurai and EVR on their birth anniversaries. I've never seen them honor VOC. So, dear Mathimaran, please save your manufactured outrage, you are outdoing Sivaji in acting though.

Mathimaran also bristled about Stalin and his concern to reform the world. Where am I to begin with that. I can start with Alexander Solzhenitsyn's 'Gulag Archipelago' but then such things are beyond Mathimaran's non-existent gray matter to understand.

Only hatred for a race can provoke somebody to write such a shameful blog. Hatred was the motivator and guiding principle. If Mathimaran had proved that such an anecdote was a fabrication I've no issues. But when conjecturing, propelled by hatred, masquerades as counter evidence we have to call him out.

In closing I'd say Radhakrishnan's birthday is worthy of being celebrated as Teachers Day even if the Stalin anecdote was fabricated (which it is not).

Nice One Aravindan.. These kind of rebuttals are need of the Hour.
V.O.C no doubt was a illustrious son of India.

In his autobiography (written in tamil in a poetry form), VOC tells that his food should be prepared by a brahmin/Pandiya Vellalar, when he was in Jail. (Page 60-66).

I doubt whether these people will ever touch such topic and I wonder whether he will provide answer for this query...

VOC, In his autobiography(in Tamil, Poetry form), he remarks that his food should be prepared by a brahmin/ Pandia Velallar in Jail.

I doubt whether mathimaran, would have heard of that?

VOC, the illustrious son of tamilnadu, had a great relation with barathi,subramaniya siva.
He addressed barathi as Mama(uncle).
VOC's son is alive..
http://venuvanamsuka.blogspot.in/2013/05/blog-post.html

Voc's sons name is wallesvaran(Wallace an English man helped VOC to get his sannath, to practice as a lawyer)

Also in the above blog, please read the paragraph, where VOC's son tells
how they were asked for a bribe for passing a cheque(nationalizing VOC's works).

i wonder what will be their reaction...

Carry on the Good Work..

At the outset I thank you as a reader for the very interesting, educative and well-written blog.
My comment per se, on your blog,is that we must be very grateful for specimens like Ve Suba, Ve Manimaran and other 'Periyarist' thinkers who use their inborn talents of writing and/or speaking to make a living and to earn some evanescent fame. . We must thank them, for, their writings and speeches provoke our society's intellectual leaders to make some special efforts to portray for the benefit of our largely sleepy members of our society, to know the real truth of the glory and greatness of our leaders of thought of the recent and hoary pasts before they get virtually stamped out by the cobwebs of oblivion. Without Ravana, Rama would not have been enabled to shine to gladden the hearts of humanity with his nobility.

Incredible post, you provide unique information in your blog.Thanks for sharing such informative blog article with us which is very beneficial and useful as user point of view.

It is as usual half understood article, Mathimaran nor Subavee possess any personal hatred for Brahmins, its only the brahminism we are fighting against and ofcourse we know the reason why you hate periyar and refer him as EV Ramasamy but referring the Rajaji as Rajaji.

Kula Kalvi is a criminal act by Rajaji and you cant mask it by his Salt Sathygraga and Bharathi is a hindu factionist so we give stick and credit where its due.