'Janab' Vajpayee: From Kargil to Agra via Kandahar

"The villainy you teach me I will execute, and it shall go hard but I shall better the instructions" says Shylock in a poignant monologue. How would Vajpayee's 6 year reign look like in the eyes of Aravindan Neelakandan? Let's do a Shylock on Neelakandan.

Aravindan Neelakandan labeled Nehru as 'Janab' Jawaharlal Nehru for the sin of having dialogues with Liaquat Ali Khan and for signing the much maligned 'Nehru-Liaquat' pact. Neelakandan wrongly claimed that Nehru and Liaquat wined and dined while thousands (counting only the Hindus as Neelakandan would do) died. Nehru clearly wrote that he met the refugees all through the days of discussions. So lets take a measure of Vajpayee using Neelakandan's rhetoric and frame of analyses.

Just the fact that Nehru was the father and grandfather of Indira and Rajiv, Neelakandan ascribed their failures, weaknesses and wrongs to Nehru but he failed to credit Nehru for the war that Indira won. Where Nehru would have waffled Indira showed steely resolve. The dramatic liberation of Bangladesh, achieved against Nixon-Kissinger opposition, earned Indira the sobriquet 'Durga' from A.B.Vajpayee himself.

Vajpayee started his term with Pokharan II which paved the way, not just for India but for Pakistan too, to be 'declared nuclear powers'. In case Neelakandan slept through the Indira era Pokharan I refers to the nuclear blast test carried out by Indira. Wisely she and her son did not go any further. But our fearless Vajpayee rushed were angels would fear to tread. Headed by a Muslim scientist (actually just project manager without a PhD) India's nuclear bomb was born. The Muslim was rewarded with the highest office, the Presidency, by pseudo-secular Janab Vajpayee. 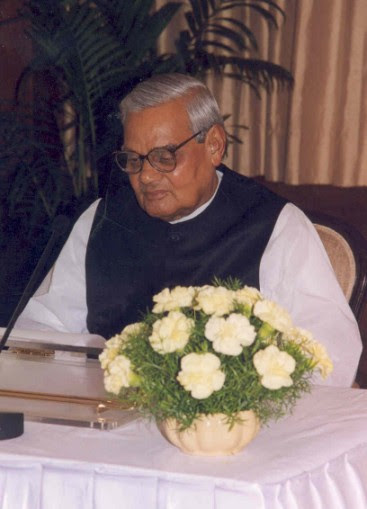 Armed with the nuclear bomb Vajpayee then, Nehru like, decided to make peace and rode a bus to Lahore declaring open a new era in Indo-Pak relationship forgetting that Pakistan had made no concrete actions meriting a peace offer. Janab Vajpayee thought he could win the Nobel peace prize, perhaps.

The bus to Lahore went nowhere and Kargil happened. The intelligence failure leading to Kargil is pardonable and is of lesser relevance here. The only reason that India lost so many precious soldiers, that now Modi vows to protect, was because Vajpayee restrained the army from crossing the LoC (Line of Control). Pakistan was the aggressor and India had every right to retaliate in full force in any means it could have chosen. Vajpayee, like Janab Nehru, sought to stake the high moral ground in international forum by not crossing the LoC even if that meant fewer Indian lives. The patriotic BJP regime then bought over priced coffins from America.(Hint:Christian America that dreams of breaking India every day. Refer Neelakandan and Rajiv Malhotra :-)). By the way why does not Shastri, who humiliatingly defeated Pakistan, and who gave back all that India won by sacrificing blood, earn the sobriquet 'Janab'?

Just when every Neelakandan was walking with their nose in the air and a chip on their shoulder after the victory at Kargil (what victory? just reclaimed what was lost) an Indian airlines flight was hijacked and taken to Kandahar. Vajpayee and the effete administration he headed (and a weak state) did not have the courage to mount an Entebbe. Given the pathetic performance of Indian commandos in Nov 2008 when Mumbai was surrendered to a handful of terrorists for nearly 2 days I am glad that Vajpayee decided to become a Janab rather than indulge in any bravado. Janab Jr Jaswant Singh accompanied a dreaded terrorist to deliver to hijackers in exchange for the hapless passengers.

BJP likes to portray itself the Republican party of India when it comes to defense. Not satisfied with sacrificing Indian lives thanks to their pusillanimity in crossing LoC during a war BJP regime was plagued by scandals related to defense purchases. The famous Tehelka sting exposed the rot within the BJP administration. I am aware that Tehelka's Tejpal is discredited today for a different offense unrelated to that sting operation.

The December 2001 attack by Pakistan funded terrorist on the Indian Parliament was the most brazen and till date the most direct attack on the very foundations of Indian nationhood (dare I say 'manhood'). Vajpayee bristled and mobilized over half a million soldiers in an act of brinkmanship mano-mano at the Pakistan border facing of 400,000 Pakistan soldiers. The standoff resulted in nearly 1800 Indian soldiers dead and loss of $3 billion. Pakistan lost $1.3billion, half that of India's losses. The end gain for India was a trip by Bill Clinton. When Clinton gave an address to the joint session of the Indian parliament he was greeted like Amitabh Bachchan and MP's fell head over heels trying to touch Clinton.

The coup-de-grace was when Vajpayee invited Pervez Musharraf to Agra to literally wine and dine, unlike Janab Nehru, for a peace summit. Musharraf, the architect of Kargil, strutted about visiting the Taj with his wife, taking a photo on the lovers bench and later visiting his ancestral home in Delhi. The summit collapsed and Musharraf gleefully blamed Janab Vajpayee. The disaster was compounded by the PR offensive of Pakistanis led by Musharraf himself while the secretive Indian side led by Vajpayee, a poet, made it easy for Pakistani versions of the collapse do the rounds. Looks like Vajpayee, just like Nehru, renowned for words and knowledge of foreign policy, floundered, like Nehru, where it counted.

Dawood Ibrahim is blamed by India for the Bombay blasts of 1993. Janab Vajpayee in his 6 years of reign never once moved anything to apprehend Ibrahim or kill him a la USA did to Osama bin Laden. After having shamefully sent a very senior minister to accompany a terrorist for hostage exchange Vajpayee did not even bother to do a hot pursuit or kill him.

On lesser serious count is Vajpayee's aligning with notoriously anti-Hindu DMK just to enjoy addressing Bharat Mata on August 15th from the ramparts of Red Fort. By continuing to use Red Fort, a symbol of the invader, as venue for addressing our beloved Bharat Mata Vajpayee proved that he is a Janab indeed. It'd be rich with irony if Modi took Jaya's support. She of the Shankaracharya arrest fame.

I am no Neelakandan so I'll disavow some of what I said above.

Not crossing the LoC was a strategic restraint that, though it cost Indian lives, saved more Indian lives. Imagine the thousands of soldiers who would have died in an all out war. Saddam Hussein lobbed patriot missiles into Tel Aviv seeking to provoke Israel to attack and this splitter the US led alliance in the 1991 Gulf War. The Arab nations, which pleaded USA to stop Saddam Hussein and to liberate Kuwait, had hypocritically insisted that at no stage should Israel enter the war. Though Israel, under international law, could have defended itself after a missile attack on its major city the nation observed restraint in the larger interest.

Anwar Sadat came close to almost destroying Israel in the Yom Kippur war. Yet, Israel pursued a peace accord with Sadat. Arafat was the sworn enemy of Israel yet Israel signed a treaty with him. Yitzhak Rabin, prodded by Bill Clinton, signed an accord with Arafat and even shook his hand. However, Rabin refused to hug Arafat. After Germany brought the world to the brink of ruin under Hitler the US poured money, by the billions, into Germany to stave of Stalin. Japan bombed Pearl Harbor even as the peace talks were underway. Later USA dropped two atom bombs and incinerated Japan. A defeated Japan was under US occupation and compelled to adopt a constitution. Today Japan and US are allies. Khrushchev said he would 'bury' America. When USSR imploded USA helped secure the Soviet nuclear arsenal in global and self interest. America carpet bombed Vietnam and today they are trading partners. This is how the world has to function. Vajpayee's attempts to forge peace with Pakistan were courageous and he should be commended for that.

America can afford to do a hit pursuit of Osama Bin Laden but let's not forget that for over a year Americans, in full view of the world, were held hostage in an Iranian embassy. America, subscribing to international law, had to give visas to Castro, Gaddafi, Chavez to visit the UN. Chavez, standing in NY, called Bush, the sitting US President, a Satan.

Israel, after the stunning swift victory in 1967, expanded its borders well beyond what the UN gave to Israel when Israel was partitioned from Palestine. It begot Israel 4 decades of strife. Neelakandan conveniently blames the 1971 massacre of Hindus (forgetting that thousands of Muslims to were massacred) in Bangladesh on the Nehru-Liaquat pact forgetting that Lal Bahadur Shastri had Pakistan on its knees. Can we blame Shastri for not only failing to re-unify Akhand Bharat but this paving the way for 1971 massacres? No. Not at all. It was and is plainly inconceivable neither Shastri nor Indira though defeating Pakistan in a war could have prevented 1971.

Historian Ramachandra Guha, another person that Neelakandan loathes, wrote an interesting piece on how Vajpayee viewed Nehru. Delivering his eulogy on Nehru Vajpayee waxed eloquent  ‘a dream has remained half-fulfilled, a song has become silent, and a flame has banished into the Unknown. The dream was of a world free of fear and hunger; the song a great epic resonant with the spirit of the Gita and as fragrant as a rose, the flame a candle which burnt all night long, showing us the way’. Vajpayee, when he took over as foreign minister in the Janata regime, insisted on retaining Nehru's picture that was in the office allocated to him as minister.

boy, you are really messed up in your mind!

I have been reading your articles and though I must say that I do not agree with everything you put across, but it does give a food for thought. A different perspective !! Very well researched and written stuff !! Applause !!