The Dinakaran family is one of the biggest impostors and fraudulent corporate merchants of faith. Apparently amidst the current furor over the Esha foundation there have been questions about the muted criticisms against 'Karunya'.
When I had to choose between 'Karunya' and 'Shanmugha' I first chose Karunya. Their brochure advertised that the college was set in the 'salubrious' environment where rivulets and Siruvani ran. The adolescent in me fantasized walking along a rivulet with a girl and shunned Shanmugha which was set along side muddy roads and had inferior looking buildings. So off I went to Karunya, against the advice of my father. Barely two days later I was grossly homesick. The hostel food was bad. Interactions with girls was a strict taboo. Above all, there was religion everywhere and every time. By sheer accident I was picked to read a Bible verse on the inaugural day. I read it wonderfully but ended it, like I always ended a speech, with a Thank You, instead of an 'Amen'. Thanks to how I read the verse the infraction was pardoned. The institute had a 'healing center' smack in the middle of the college. When I entered the college in 1990 they were limping back to normalcy from a strike that was supposedly instigated by the BJP elements in Coimbatore. Already the college was getting embroiled in controversies over conversions. I ran the hell out of it to Tanjore and joined Shanmugha.
At Shanmugha a Brahmin Gandhian was the principal. In my days it was a very accepting and very un-Karunya like institution. The English professor and the principal took a great liking to me. And when I brought home laurels in speech competitions they were thrilled. On a symposium about Gandhi listening to defending Gandhi the chief guest thought I spoke like a 'young Vivekananda' (ahem, yes its that easy to create an impression). I had 4 wonderful years and I'm extremely pained to see that institution become a Hindu version of Karunya.
Christian institutions, until the 90s (the time I left India), provided a yeoman service in education. Especially the Catholic institutions. I studied in Catholic run convents for 10 years and they were run perfectly secular, by Indian standards. I'd suggest that it is the protestant institutions that blurred the line between being educational institutions and religious institutions. I'm sure some Catholic institutions too tease the boundaries.
My first impression of 'Jesus Calls' building in Chennai, which I visited prior to joining Karunya, was that it was a pretentious gargantuan building with a granite facade. My first thought was "it must be lucrative to be in the Godmen business". Bro. D.G.S. Dhinakaran, the patriarch, was well known in our family and pretty close to some family members too. Dhinakaran, it was said, came from a very humble background and worked in some bank until the Lord appeared, he said, face-to-face, and called him to be an evangelist. The rest is history.

My father was a devout Christian but a man of high principles and simple faith. While he retained a certain regard for Dhinakaran he recoiled with horror and disgust at much of what Dhinakaran dished out in the name of religion. Dhinakaran practically started the trend of mega-church globe-trotting televangelists in Tamil Nadu. The humbly begun 'Jesus Calls' ministry has become a family run multi-million dollar corporate conglomerate.
I puked hearing Paul Dhinakaran once saying the Lord commanded him to open a center in Israel and beseeched funds. It is these kind of people that Christ wanted to cleanse the churches of. Faith sells in India, like elsewhere, but probably more than anywhere. 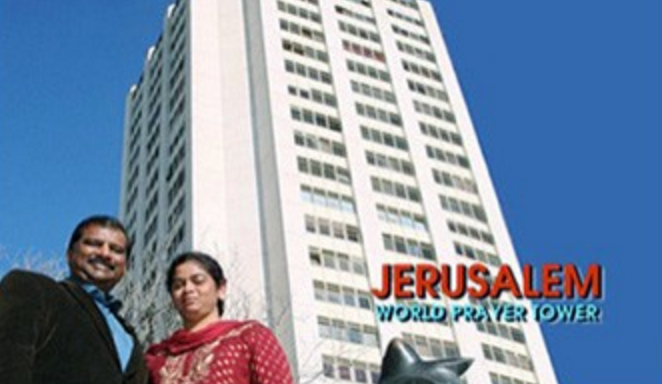 The worst offense by the Dhinakaran clan is the 'healing' business that they indulge. Scandals abound about paid volunteers. It is pathetic to see tens of thousands wailing afflicted by a mass hypnotism and claiming to have been cured by these hucksters of faith. Sure, one could argue that that is exactly why faith, always, is the slippery road away from reason and into irrationality.

This is why Bertrand Russell ridiculed that religion is nothing more than an emotional crutch. However, simple folk like my father do exist by the millions for whom while religion is indeed an emotional crutch in moments of great despair and also a source of great succor giving hope when none need exist, like when cancer was spreading through his body. While the world appears spinning out of control a belief that some cosmic justice would eventually prevail is irrational but it does provide hope, however irrational its basis maybe. That is what the Dhinakarans of the world capitalize on.

Dhinakaran went around claiming an ability to prophesy. His powers apparently failed him on a fateful day when his family met with a very tragic accident that claimed the life of his teenage daughter. Apologies for citing a tragic incident to drive home a point but it best illustrates the fraud that is being peddled.

Another group that my father could stand very little of was the Pentecostal group. Absolute fanatics. Complete blind followers who make it their life's mission to not only destroy happiness in their lives but to do so to everyone in their orbit. Nothing has probably caused more misery in the world to others and been injurious to Christianity itself than the Biblical verse calling forth its adherents to 'go spread the word'. It is a shameful fact that many Christians look at others not as human beings but as prospective Christians.

I completely abhor the idea of minority run institutions being afforded special exemptions. Whether it is Catholic institutions in America that want exemptions from being required to provide family planning in their health care plans to educational and other institutions in India that use the minority label to carve out niche exemptions under the law. I've serious concerns about Uniform Civil Code and that's a debate for a different day.
Whether it is faith in divinity or a doctrine it can easily become infused with fanaticism that is blind to facts and reason. I'm not an atheist but closer to an agnostic. I've enjoyed and been intellectually nourished on two of India's great streams of religions. I can visit the Brihadeeshwara Temple and the Chapel at Princeton University with equanimity. Yes, I'm also a big time admirer of Western Civilization and the leaps it has made. I do think Indian civilization, hoary as it once was, it has not rejuvenated itself and is adrift. I plan to go to Italy in the summer. I'm sure that the Sistine Chapel will thrill me, not because it portrays a scene from the Book of Genesis but because that painting by Michelangelo shows the apogee that the human mind is capable. Despite an afternoon spent with Jeyamohan on how Indian sculptures have their own unique idioms I still remain in awe of the statue of David in Florence. Probably if I had traveled to few choice temples in North India I might have been persuaded otherwise and for that I am the poorer, perhaps.

In my opinion every religion and culture carries with it unique strengths and unique illnesses. Often times the parlor game of trying to compare and contrast is a minefield. I've often seen some indulge in taking potshots at Christianity using the books of a Richard Dawkins or of Christopher Hitchens. I chuckle that the West at least produced a Dawkins and a Hitchins, themselves inferior to a mind like Voltaire, but the best that Tamil Nadu could produce was the rabble rouser E.V. Ramasamy.

Atheism, like faith, has its intellectual variants. There's the patently crass and anti-intellectual E.V. Ramasamy or pretend Voltaire's like Dawkins and then there's a Voltaire. Let each man pick one according to his own intellectual abilities.

There is no faith or religion that is tailor made for science. Faith, by definition, is unscientific. The ways of faith, irrespective of religion, is antithetical to scientific principles. Societies and cultures have either found ways to have both competing impulses live in harmony or make one subservient to another, usually it is science that cedes the ground.

Once a pastor prophesied, speaking in 'tongues' of course, that I'd become a preacher. The joke in the family is that it is indeed true, albeit, in ways different than what the pastor probably prophesied. The jury, I'd say, is out on that.

As an atheist author once put it, 'Begone Godmen'.

PS: Social media sleuths have often tried to figure out my religious and caste antecedents. While I've written about them openly the full picture is far too complicated. My family, like many an Indian family, is a happy jumble of castes and religions. And, for the record I'm not a member or any Church or Temple or religious association and given where I live my caste, which has only caused irreparable harm to me, is no longer relevant.

Posted by Athenaeum at 8:41 PM

Excellent. "Healing" business has created much more misery than healing.

A fascinating piece as always. And my favourite topic Religion and its depravity.

Dhinakaran seems to be India's version of Benny Hinn.

So crispy and well written on a sensitive topic!!

An eye opener for those who follow these Godmen blindly!

I Agree, the others are his Wife, son and grandchildren, His son follows his steps..does for others his son,daughter..