This week's issue of Vikatan had an article titled "தமிழ் மட்டும்தான் சொத்து". It was about one Mr Radhakrishnan whose house in Pondicherry is quite unique. The photo below should tell you why. 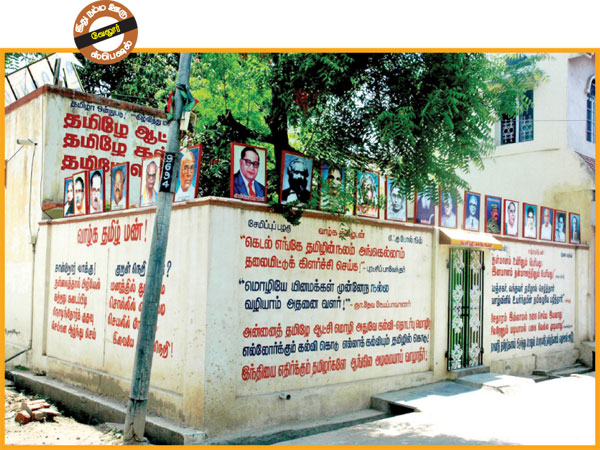 The walls of the house have verses proclaiming glory of Tamil and verses that demand a primacy for Tamil in education and all walks of life. The walls are also adorned, as you can see, with photos of Tamil literary savants like Bharathidasan, Maraimalai Adigal, etc and here is the curiosity, photos of Ambedkar, Karl Marx, Lenin, Prabhakaran and finally the mandatory triumvirate of C.N.Annathurai, M.Karunanidhi and E.V.Ramasamy Naicker. Unsurprisingly, rather as expected, a distinct omission of Bharathi.


When I meet or read an English literary enthusiast its almost impossible to know his/her ideological lineage or political affiliations. With Tamil literature enthusiasts I've no such problems. I draw a distinction between enthusiasts or lovers of literature against creators. Most enthusiasts or lovers of Tamil literature, especially non-brahmins, are clearly defined by the following: Fealty to Dravidian ideology as 'defined' from time to time by DK or DMK (never ADMK), blatant communist or muddled socialist leaning, avowedly anti-capitalist, a thirsting for bygone glory reflected by admiration totalitarian Prabakaran, fanatically chauvinistic to the core on linguistic issues and to cap it all anti-brahminism. Many of these actually contradict one and another but that never matters. I've never understood this cocktail of politics, economics and linguistic chauvinism. What can I say if one has portraits of Ambedkar, Marx, Lenin and Karunanidhi in the same row.


I can understand one's love for a language, I can understand one wanting to see one's mother tongue become lingua-franca and have a cherished place in daily life. Once a person told me "you are anti-Tamil because you hate Kalaignar, you hate Anna". I wondered what has one got to do with the other. If you did not accept the literary genius of C.N.Annathurai or Kalaignar you become ipso-facto anti-Tamil.


EVR had called Tamil a language fit for barbarians and exhorted Tamils to study English. It was the advent of DMK that created an ideology that mixed up everything, understanding very little of any of the components. What is worse serious non-partisan academics have been swept aside and chauvinistic shallow hacks posing as academics have taken their place peddling nonsense as received wisdom. When I read Dr M.Varadarajan's (Mu.Va) "History of Tamil literature" I was stunned to see him emphasize that the term "Muthamizh" (Three forms of Tamil -- Drama, Music, Poetry) is a recent invention. As he progresses  to discuss that he sheepishly says "there is no drama in Tamil, we don't have any works of drama that would qualify for that genre". A DMK party hack would cry hoarse about "Silappathikaaram". Silappathikaaram only talks about how street plays were conducted. Silappathikaram is not "King lear" or "A Dolls House". Jayakanthan, referring to Manonmaniam, another pet example of dramatic Tamil, said "its a fourth rated recreation of a third rated work". The tragedy is not the general population buying this charade of dramatic Tamil, the real tragedy is its a rarity to find any so-called Tamil scholar to disagree with it.


Tamil enthusiasts love to believe anything and everything that would glorify Tamil. Tamil music is another fertile ground for politics and ideological posturing. Carnatic music, to some extent fairly and to some extent unfairly, is seen as the preserve of Brahmin's hence Carnatic music is seen as another battlefield in challenging the Brahminical order of supremacy. If Harold Bloom, Yale university's legendary Shakespearean, wrote a book on 'English Music' he would be laughed out. But in Tamil Nadu people with dubious credentials would freely talk about musical traditions and how Tamil had it all. For a Tamil enthusiast no field is alien, anything is fertile ground to wade into and claim primacy for Tamil texts, often by contorting evidence and more often with no evidence. Anbazhagan, a minister and a lackey  to Karunanidhi, would write a lesson for Tamil textbook equating Kural and Newton's 3rd law. Only a Tamil enthusiast will have the audacity (I am being polite here) to claim Kamban knew of atomic fission.


Only in Tamil Nadu have politicians become arbiters of literature. Today what most Tamilians understand as 'characteristics' of Tamil culture and Tamil as language comes from Karunanidhi who has cast a long and shameful shadow on Tamil academia. Only in Tamil Nadu could a person like Vaiko be hailed as 'literary exponent'. Only in Tamil Nadu would Karunanidhi's opinion be more important on a question regarding Tamil than any scholar (if one such still remains). DMK's two leading lights C.N.Annathurai and Karunanidhi have completely obliterated impartial scholarship and have monopolized the academic framework of Tamil. Its a phenomenon thats worthy a sociological study by itself. Silappathikaaram is hailed as "Epic of Tamils", Kamba Ramayanam is derided as pornography. The inherent contradictions in both claims, the lack of academic merit in those making such accusations were never given a thought to. Silappathikaaram, a male chauvinistic epic with references to Karma written by a Jain is hailed as "Epic of Tamils" while it completely contradicts every pet ideology of DMK.


Why did I say that Radhakrishnan (what a name for a DK member) had unsurprisingly omitted a portrait of Bharathi? Nowhere in the world was a poet of Bharathi's stature shunned because of his/her caste. DMK incessantly promoted Bharathidasan against Bharathi who was derided as "paarpana Kavi" (Brahmin Poet). This, against Bharathi. Only the venal minds of DMK and its ideological adherents are capable of such shameful acts. A leading contemporary Tamil writer recently wrote in his blog that in the last 5 years whenever recommendations had to be sent for Jnanpith the explicit command was "see to it that its not a Brahmin author". Asokamithran, a giant in Tamil literature, being Brahmin is shunned. Its thanks to U.Ve. Swaminatha Iyer, that much of what we know as Tamil literary texts even survives. It was M.G.R., a malayalee, who created a university for Tamil. Tamil Bibles, translated from Hebrew and Greek by Brahmins is a veritable treasure to read. The Tamil Christian hymns too richly borrow from Hindu imagery.


During a visit to India I bought some Tamil texts. "Purananooru" (400 poems on war and life) has a rich set of poems by poet Kapilar. Kapilar's poems dwell on the generosity of King Paari, Paari's death by treachery, Pari's daughter's being destitutes etc. Would I ever read a book that would take those 10+ poems, situate them in historical context, set out the details of their friendship etc without a shred of jingoism or mixing up political ideologies? Not in a 100 lives. So many books could be spun out of that collection of 400 poems yet none that is accessible to lay or even a discerning interested reader is available. If such a collection of poems and such dramatic lives were in English literature some professor would have turned it into a Pulitzer prize winning book.
Posted by Athenaeum at 11:55 PM

Good article. Hopefully we have seen the end of DMK. There is a real danger that this chauvinism would spread to the 20+ aged people of today. Some of my IT friends take these extreme positions just to compensate for the blandness in their lives.

Fantastic article. I chanced upon your blog via some random Twitter link and I am hooked. (If you see a lot of traffic to different posts from one computer yesterday/today, it's likely me.) I am specifically fascinated by your views on TN politics, the unabashed mixing of language, politics and ideologies, and your very bare-bones factual reconstruction/restatements of events. Anyway - long ramble apart - I wanted to ask, do you write anywhere else besides this blog? I'd like to read up elsewhere too, if possible.