Tragedy struck a Jewish school in South France today when an unidentified gunman killed four an adult, 13 year old girl,a 7 year old and a 3 year old, six others were wounded. They had been shot at close quarters. They were shot because they were Jews and the school was a Jewish school. In 2008 Pakistani terrorist thugs who terrorized Mumbai specifically targeted a Jewish chabad for their killing spree. I shall reserve my comment on Israel's critics for a following blog but this provides a backdrop for my visit to the home of Holocaust's most famous victim, Anne Frank. Before that a brief on the Torture Museum.

A museum focusing on torture was very inviting. Though I am broadly familiar with the themes of torture, especially the use of torture by the Christian Church seeing the instruments of torture along with helpful notes was chilling. The Spanish Inquisition made a name for itself with Torquemada and the inquisition chair (below)

The accused has to sit on that chair and the screws would be tightened to maximize pain. This was mostly used on women accused of being witches. The rack pictured below (http://www.torturemuseum.nl/instruments-of-torture/) is another instrument the very sight of which is painful.

Religious minorities (mostly Jews), dissenters, minorities, gays, political prisoners and lots of women bore the brunt of these punishments. The museum, in European tradition, had the usual US bashing. Fleeting mention was made of Guantanamo. Guantanamo is picnic compared to the above.

As a deep admirer of Israel and Jewish history the holocaust remains an obsessive topic for me. In 2010 when I toured Amsterdam for a few hours I glimpsed the home of Anne Frank during a canal cruise. This year I made what can be called a pilgrimage to her home. Anne Frank's family and another family of 3, 8 Jews totally, hid in a secret annexe in a factory for 2 years during the war fearing deportation to extermination camps. The families were betrayed on 8th August 1944 and were deported first to Auschwitz. Anne Frank and her sister were later deported to Bergen Belsen. One has to really pause and digest this. Jews arrested in Amsterdam were transported to Auschwitz in Poland. Then two of them get transported halfway back into Bergen-Belsen in Germany. I visited a Gestapo jail in Cologne where a prisoner from Ukraine (!!!) had scrawled on the walls. Imagine the logistics needed for all these transports that had no strategic goal except hate. By the time the family was arrested Hitler's Third Reich was crumbling and his army was being beaten back by the equally murderous Red Army to the East and by the American and British forces from the West.

Anne and her sister Margot perished in the typhus epidemic that swept Bergen-Belsen. The sisters died a few days apart next to each other sometime in March 1945. Allied armies liberated Bergen-Belsen in April 1945. Only Otto Frank, Anne's father, survived from Auschwitz. Anne's mother had died too. Otto made his way back to Amsterdam and searched for his darling children. Finally he learnt that they were dead.

When the Frank family went into hiding Anne was 13. Anne received a diary as gift. While in hiding this girl, just entering her teens, wrote a journal of all that happened for two years. The last entry is on 1st August 1944. She has interest in movies, the helpers who hid the family get her movie magazines, Otto marks the growth of his daughters with a pencil mark (it is still there), a map is stuck to follow the progress of Allied army since Normandy landings, a radio keeps them connected, Margot still takes Latin lessons and sends her work for correction pretending  to be somebody else, a 16 year old boy (from the other family) kindles love in Anne, Anne has her first kiss, she writes of Gandhi too hearing from radio reports.

Otto Frank discovers the diary and publishes it to universal acclaim. The diary has been translated into tens of languages and has sold millions. Otto, with help, converted the annexe into a museum. A very touching photo is below. Here is Otto Frank, just before the museum is opened to public, looking alone and pensive at the floor where his children played and his wife walked. The pain is palpable and sorrow engulfs the viewer in an emotional embrace across time and space. 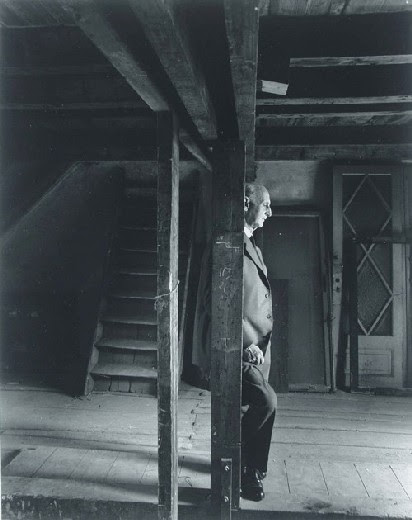 The photographer Arnold Newman who took the photo reminisced, "how could I ask this man to pose? I couldn't. Instead I just waited and Otto went into a deeply pensive mood. It was then I took the photograph". They cried and embraced after the photo shoot ended.

Anne Frank wrote in her diary, "One day this terrible war will be over. The time will come when will be people again and not just Jews!".

Whether it is Jeremiah Wright or Al Sharpton spewing explicit and implicit anti-semitism or this madman today today who killed children just because they are Jews the sad answer is Anne Frank's hope only lives on as hope.