Taking a break from politics I'll continue my travelogue. From Edinburgh we proceeded to York. "Quaint" is a word that often comes to mind in Europe and especially in the fabled English countryside. York  is no exception and is superseded only by the picturesque Lake District which we visited next. New York and New York City derive their name from York. 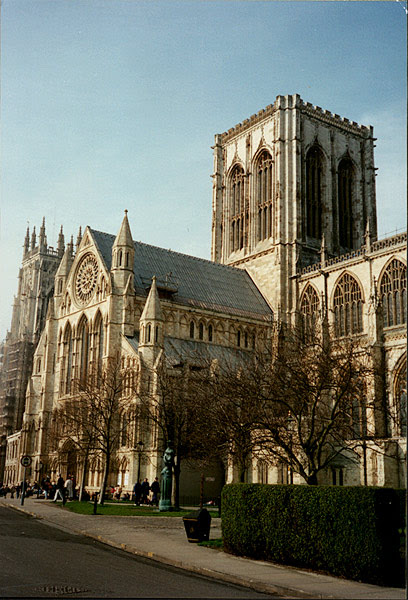 The cathedral has a history dating back to 7th century. It is the main draw of the city. Our guide pointed to a small alcove and said "here is where Bishop John Sentamu sat down in fast protesting against the war situation in the middle east in 2006". She was referring to Israel's war (or battle) against Hezbollah in Lebanon in 2006. I asked her "was he protesting against Israel". She replied "he was protesting against the war situation". Now my brother got jittery and I let it go telling my brother "I'd bet that the good bishop did not protest against the 'war situation' when Arafat declared the Second Intifada after walking out of the famous Camp David talks". I later googled and was vindicated.

York is the site of a gruesome anti-semitic violence. In 1190 AD nearly 200 Jewish men, women and children took refuge in Clifford Tower. Many committed suicide fearing torture and forced conversions, those alive, including children were killed in most heinous manner. Jews were later expelled from UK in 1290 AD. Sentamu is York's first Afro-American bishop and is rumored to be popular enough to become the next Arch Bishop of Canterbury. The Afro-American community in USA has a fractured relationship with Jews and Israel. Given this backdrop it is interesting to put Sentamu's fast into perspective.

We then got on to an usual ride on a hop-on hop-off. Our first stop was the famous Shambles shopping street. UK is famous for its 'tea-room's and York had the best, the world famous Betty's Tea Room

We actually just stumbled into Betty's. Once inside we knew we were at a really classy place. Cell phones should be switched off. The pastries, the cake, the silver ware and every thing was just how it should be. It was simply out of the world. We loved it so much that we went back for dinner too.

York's history is blood stained going back to the Viking invasion of what the Viking's referred to as 'Jorvik'. The Vikings and their famed (or notorious) long ships invaded York in 867 AD. A "Jorvik Museum" is very instructive and unique. They had discovered archeological remains dating back by 1000 years in York and the museum in a very innovative manner displays those in a city like miniature setting encased by a glass floor on which we can walk and ponder. A unique mono-rail chair car whisked us through a re-creation of Nordic village.

Having visited Amsterdam then UK and seeing the Nordic history one wonders at how world supremacy had risen and fallen. The Dutch, the British, the Nords were all great powers not too long ago. The sun set on the British empire only recently. I was reminded of Will Durant writing in "Story of Civilization" that each civilization must renew itself to stay relevant. America, the last remaining super power is at the cross-roads of history. When I traveled in European cities I've always wondered at the lack of diversity in demographics. Whether it is Paris or Amsterdam or London or York or Zurich or Edinburgh nothing comes close to the vibrant, vigorous diversity of New York City, Washington DC, San Francisco, Los Angeles, Orlando. THAT is the key of America's dynamism and its secret of constant self-renewal.

Posted by Athenaeum at 8:36 PM