Gods and Calamities: From Gandhi to Gurumurthy. Voltaire and Lisbon Earthquake

Calling a natural disaster as divine retribution is an age old game stretching into antiquity. S. Gurumurthy, a chartered accountant and a complete bigot and purveyor of revisionist history, now appointed director of RBI and perennial invitee to SASTRA, has asked the courts of law to investigate whether Gods are punishing Kerala for the sin of a court adjudicating on allowing women into the Sabarimala temple.  Gurumurthy is treading a well worn path that Gandhi and Rousseau have trodden.


Many have expressed their disgust at such intemperate bigoted nonsense. Strangely, no one remembered the notorious incident of Gandhi linking an earthquake to the sin of untouchability. On 15th January 1934 a 8.0 magnitude earthquake shook Bihar and nearly 10,000-12,000 died. Gandhi who was in Tirunelveli (Tamil Nadu) in his tour against untouchability heard of the tragedy and said that that was divine retribution for Hindus practicing untouchability. Tagore who read about Gandhi's comment was enraged and wrote to 'dear Mahatmaji' and asked if he has said so. Tagore issued a rebuttal and Gandhi printed it in 'Harijan' on 16th February 1934.

Tagore wrote, "the kind of argument, that Mahatmaji uses by exploiting an event of cosmic disturbances far better suits the psychology of his opponents than his own, and it would not have surprised me at all if they had taken this opportunity of holding him and his followers responsible for the visitation of divine anger". Gandhi, in his reply, also published in Harijan, concurs that "Santanists have a  perfect right to say that it was due to my crime of preaching against untouchability". 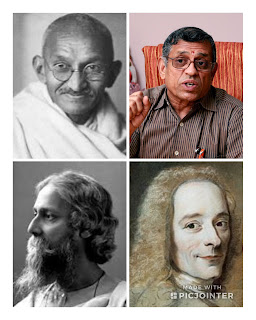 Tagore was prescient. It is the Sanatanists who are using the 'divine retribution' argument today. It'd be stupidity to take Gurumurthy's idiocy and flagellate a community or a religion. Yes the Sangh Parivar is showing crass idiocy and grotesque bigotry as their twitter posts show but they're being equally and more vehemently opposed by other Hindus. 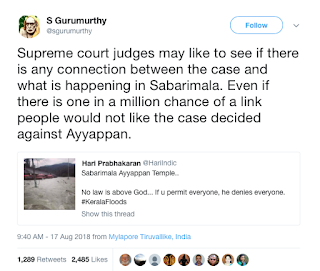 A fundamentalist Christian sect, essentially one family's church, used to go to military funerals in US and hold up placards saying that such deaths were god's punishment for US tolerating gays and a long list of, what in their opinion, were sins against the Church.

In November 1755 an earthquake occurred in Lisbon and nearly 30,000 were killed. The quake happened on 'All Saints day' when Churches were crowded. "Death finding its enemies in close formation had reaped a rich harvest". The French clergy rejoiced that it was a divine retribution. (Remember the story of Sodom and Gomorrah). Voltaire, enraged and pained, composed a poem asking:

"Seeing this mass of victims, will you say,“God is avenged. Their death is the price of their crimes”? What crime, what fault had the young committed,Who lie bleeding at their mother’s breast?Did fallen Lisbon indulge in more vicesThan London or Paris, which live in pleasure?Lisbon is no more, but they dance in Paris."

Will Durant captures the Voltaire's theological conundrum, "Either God can prevent evil and he will not; or he wishes to prevent it and he cannot. He was not satisfied with Spinoza's answer that good and evil  are human terms, inapplicable to the universe, and that our tragedies are trivial things in the perspective of the eternity".

Jewish Rabbi Harold Kushner's son died of progeria he struggled with the same conundrum and wrote the bestseller 'When bad things happen to good people". Kushner struggles with reconciling God's omnipotence and the existence of tragedies and evil. Anyone visiting a pediatric cancer ward will leave an atheist or resign oneself to wooly theorizing of divine retribution. Seeing a Jewish child being thrown up in the air and being shot mid-air as sport a holocaust memoir recalls an exasperated comment, "if there is god on earth where is he now?"

It is not only the orthodoxy that come up with such nonsense and insensitivities. From Rousseau to K. Veeramani the so called rationalists have not acquitted themselves with any great show of sensibility either. Rousseau, Durant says, considered ",an himself was to be blamed for the disaster. If we had lived out in the fields, not in the towns, we should not be killed on so large a scale; if we lived under the sky, and not in houses, houses would not fall upon us". "Voltaire was amazed at the popularity won by this profound theodicy". In response Voltaire wrote, in three days, Candide. "Never was", Durant says, "pessimism so gaily argued; never was man made to laugh so heartily while learning that this is a world of woe". K. Veeramani, in his rag sheet of a newspaper, has often exulted when pilgrims to Sabarimala encountered accidents and asked "where was God".

Voltaire was never an atheist. Blessing Benjamin Franklin's grandson the aging philosopher said, "God and liberty". His final statement dictated to his secretary Wagner said, "I die adoring God, loving my friends, not hating my enemies, and detesting superstition".

I'd not like the reader to even remotely think that I'm equating Gandhi's stupidity with Gurumurthy's bigotry. Gandhi's stupidity, while being stupidity, at least had a nobler intention to draw attention to Hinduism's most cruel practice, untouchability. It was during that untouchability tour that Santanists made attempts on Gandhi's life and in places shouts of 'death to Gandhi' happened. Gandhi in his reply to Tagore conceded that his concept of linking cosmic events to a society's morals could be ridiculed and that many would shy, fearing ridicule, from voicing such opinions. Too often Gandhi's readiness to be open is used to give him a pass. For such a self-ware man it is not fear of ridicule that should have restrained him but the sheer stupidity of the opinion should've restrained him.

A side note, Thamizachi Thangapandiyan, another charlatan, albeit of the Dravidian party kind, once threw a canard that Tagore, due to this incident, took back the title 'Mahatma'. Of course, that was a complete lie as the letters showed. To Tagore Gandhi was always a Mahatma and to Gandhi Tagore was always a Gurudev. I had written a detailed rebuttal to that canard of Thamizhachi in 2012. 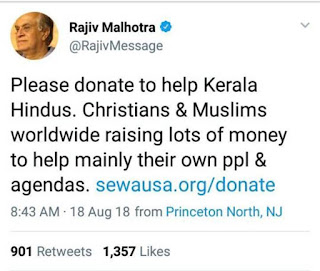 The current climate of unabashed bigotry and brazenness in opining openly, with no shame, is unprecedented and it is a clear outcome of what is normalized in Modi's India. Rajiv Malhotra, a perfect companion to Gurumurthy in parading bigotry and charlatan takes on history was not be left behind. He tweeted, "please donate to help Kerala HIndus. Christian & Muslims worldwide raising lots of money to help mainly their own ppl & agenda". The location tag says "Princeton North, NJ", time stamped "8:43 AM ; 18th August 18". I was in Princeton university the same day noon. Thank god my joyous weekend visit was spared the agony of sighting this scumbag. The tweet is now deleted but, thanks to FaceBook here it is. Modi's India is becoming a swamp of bigotry unprecedented in the recent history of India.

In an interesting coincidence Gurumurthy has as his profile picture the much revered pontiff of Kanchi mutt, Sri. Chandrasekarendra Swamigal. During Gandhi's untouchability tour the pontiff met him and pleaded not to destroy Hinduism with his campaign against Hinduism.

I'm not well versed in either the Bible or Hinduism and from my limited knowledge I wonder about this fetish of Sangh Parivar to ascribe the doctrine of divine retribution to the Kerala floods. It is certainly a Christian notion, particularly Judaic or Old Testament, to ascribe God's anger at a city's waywardness manifested as natural disasters like flood and earthquake. Why do Gandhi and Gurumurthy, two very devout Hindus, use that metaphor? Doesn't Gurumurthy know that the days even the use of a Christian metaphor could be construed as being a crypto-Christian or a secretly converted Hindu who stands exposed in a verbal slip?


5. When Bad Things Happen to Good People - Harold Kushner
6. My rebuttal to Thamizhachi's Slander on Gandhi http://contrarianworld.blogspot.com/2012/07/thamizhachi-thangapandiyans-slander-on.html
Posted by Athenaeum at 10:53 PM

Just stumbled on to your blog. Binge reading through your decade long writing. Quite interesting and thought provoking. By the way divine retribution by deluge is not just a christian or biblical concept. Note the episode in bhagawatham where Indra gets upset with yadavas and unleashes Varuna the rain god on them and Krishna protects yadavas.