Almost everyone across a wide intellectual and political spectrum has some opinion of what America is. While many would love to settle down in USA quite a lot of them and others have only a vague idea  of what America is beyond the fact that one could possibly earn in US dollars. Noam Chomsky, whom the NYT called 'arguably the greatest intellectual alive', has spent decades writing tract after tract only shining a spotlight on America's underbelly. Amongst the many books that he continues to churn not a single word is good about America. Added to that a clip from a recent TV series informed Americans that their country is "not the greatest country 'anymore'". A visiting Tamil writer informed his eager listeners that Americans as a people are kind, generous and are different from 'America' the country. I am still trying to understand that loopy statement. As an immigrant who loves US I decided to write a series "understanding America". No better place to start that than with a narration of how America fed not only its friends but also its sworn enemy, Bolshevik Russia.

Herbert Hoover, as Truman put it, "wasnt' one of those fellows born with a gold spoon in his mouth, his father was a blacksmith in West Branch, Iowa, both his parents died before he was 9 years old". Hoover became a mining engineer and prospered. When World War-I broke out Hoover was in London. Many Americans scrambled to return to US from Europe but lacked money and papers or other resources. Hoover formed a committee to help the 'busted yankees'. Noticing his organizational skills and the success of his program the Wilson administration asked him to head "committee for Relief in Belgium" as Belgium, run over by Germans, was starving. Millions of Belgians needed food and they needed it urgently. Later Wilson made him the head of 'US Food Administration'. By the time the war ended Hoover was largely responsible for saving millions of Belgians from near certain death. Streets in Belgium were named for Hoover. America had set aside $100 million to rehabilitate Europe. Humanitarianism was tinged with real politik too. As US would do after World-War II with Marshall Plan so too this assistance was to ensure that a starving Europe is not swept with a 'Red' rage.

The Belgian relief would pale into comparison, morally and scale-wise, compared to what Hoover would achieve in Bolshevik USSR. A PBS documentary 'American Experiences: The great famine' captures the rescue in great detail (watch it here http://video.iptv.org/video/1853678422 . Famine, due to natural causes and the hot headed collectivization schemes, ravaged USSR. Tens of thousands died every week. While no other nation lifted a finger the US and Herbert Hoover stepped in to stop a human catastrophe on a gargantuan scale. 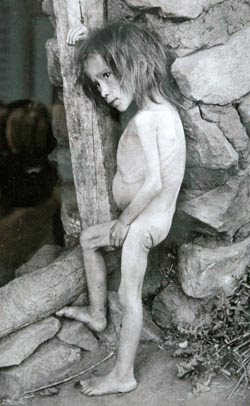 Maxim Gorki pleaded to the west "Gloomy days have come to the land of Tolstoy, Dostoyevsky and Mendeleev". PBS commentator noted that Gorki did not mention Lenin. Hoover, now US Secretary of commerce and head of 'American relief administration', piloted a bill, 'Russsian Famine Relief Act' in 1921 at a cost of $21 million (in 1921!!!). The scale of work envisioned was one that only the 'American spirit', that indefinable, soaring greatness, could accomplish.

In 1921 USSR was a very backward country and the revolution had torn the country inside out. The infrastructure, whatever pathetic infrastructure there was, was destroyed. A crumbling economy, famine, repressive regime gave rise to rebellions, notably Kronstadt rebellion. David Remnick, Pulitzer winning author of 'Lenin's Tomb', notes that 'Stalin was a lamb compared to Lenin'. Trotsky under Lenin's command suppressed the Kronstadt rebellion with a heavy hand killing or executing thousands. Noted communist and author Arthur Koestler would recall that as a water shed moment in renouncing communism in 'The God that failed'.

Lenin, of course, was suspicious of American help. Lenin, naturally, wanted control of how food was distributed. While assuring Lenin on political interference Hoover insisted that America will control the distribution to ensure anyone who starved got aid irrespective of their political leanings. Lenin, would use Cheka, the secret police, to monitor the ARA.

In January 1922 thousands of tons of wheat sailed from NYC to USSR. The ARA had divided the famine regions into ten zones with each being administered by an American. One has to pause and reflect what a herculean task it was to transport relief across a very climactically hostile terrain, the Russian steppes, in the notorious Russian winter that had defeated Napoleon and will humble Hitler 20 years later. This is terrain and climate not familiar to any westerner. It took 16 days for the ships to travel from NY to Moscow through Atlantic over 5000 miles cutting through a frozen Black Sea but it took 21 days to travel just 1300 miles from Novorossisk to Samara. Traveling through Russia when typhoid swept through the villages would endanger the lives of many American relief personnel.

Hoover is mostly remembered as the President who presided over the Great Depression. FDR, like what Obama is doing now, milked that fact relentlessly and blamed Hoover for everything for nearly 15 years over 3 terms. When Truman became President and presided over a devastated world in the after math of the war once again humanitarian relief became a focus as Europe starved.

Time magazine writers Nancy Gibbs and Michael Duffy wrote a readable book on how US Presidents in office formed testy alliances with ex-Presidents, some of whom were defeated by the incumbent, for a larger good. Truman recruited Hoover to do what Hoover does best, feed millions.

'Until that point, it was not uncommon for as much as a third of the population in a war zone to die of hunger'. Truman was determined not to allow that. Attlee cabled Truman for help. Europe and Asia's production had gone down. 'Canada's production of wheat was down 25%". Once again, US, rose to shoulder the burden.

Hoover and Truman called for Americans to sacrifice to feed the world. US whiskey and alcohol production was cut to save wheat. Americans were asked to cut down wheat consumption by 25%, fat consumption etc were rationed. US can only do so much hence Hoover, age 71, went on a world tour to organize food from every corner of the world and to cut through red tape. 'He visited slums and orphanages'. Truman asked Americans to undergo "European 'austerity' diet two days a week. Millions will surely dies unless we eat less".

Hoover went to South American countries which US had actively tried to intervene politically in previous years. In Argentina, Hoover, ex-US president, was seated "196th out of 216 guests: but I was resolved ... to eat even Argentine dirt if I could get the 1.6 million tons".

Hoover had his failings too like his other great effort during Mississippi floods showed. Afro-Americans were ignored and their silence was bought with a promise of help during a Hoover presidency. Doubters can quibble that Hoover's help for the Bolsheviks was tainted by the hope that seeing America's excellence and generosity Russians would just might turn away from communism. Compared to the millions of lives saved such doubts are but cavils with roots in anti-American prejudice.

America continued to supply food to communist USSR while Kruschev vowed to 'bury' USA. India, ally and foot stool of USSR, too was fed by America.
Posted by Athenaeum at 9:51 PM